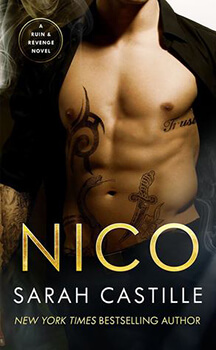 Las Vegas Mafia boss, Nico Toscani, is used to getting what he wants, whether it is having the City of Sin under his rule or a beautiful woman in his bed. But when he meets his match in the gorgeous, headstrong Mia Cordano, the daughter of a rival crime lord, all bets are off. . .

Sexy computer hacker, Mia, struggles to break free of her ruthless father’s Mafia ties…but she can’t resist the powerful and seductive Nico, who will stop at nothing to possess her. With their families locked in a brutal war for control of the city, Mia and Nico enter into a forbidden game. Will they surrender to the passion that burns between them—and risk tearing apart their families? Or will Nico be forced to betray the only woman who sets his blood on fire?

Nico is the first book in a full-length, standalone series by New York Times bestselling author, Sarah Castille, set in Las Vegas and featuring deliciously sexy mafia bosses and the women who can’t help but love them.

He didn’t want her to leave, but he couldn’t think of a reason to ask her to stay, and he didn’t want to endanger her any further.

She unlocked her car, hesitated. “How did you start it without a key?”

He put his hand in his pocket, fingered the spare key the mechanic had made for him. “I have a lot of friends. They have many skills and owe me many favors.”

His blood heated, rushed to his groin, her soft, sensual tone as potent as if she had grasped his cock. When she closed the distance between them, it was all he could do to keep his hands by his sides. He hadn’t arranged for her car to be fixed so she would owe him, but if she wanted to repay the debt, he wasn’t going to complain.

“How’s this?” She placed her hands on his chest, leaned up, and kissed his cheek.

Her kiss was so utterly unexpected, so breathtakingly sweet; his body reacted before his mind could process the danger. In a moment of madness where he gave in to the wildness he kept so closely in check, he yanked her against him and crushed his mouth against hers in a kiss as fierce as the desire coursing through his veins.

“Oh God.” She moaned, wrapped her arms around his neck.

Nico pressed her soft body against him and pushed his tongue between her lips, sweeping her mouth with ravenous intent as he drank of her sweetness like a man dying of thirst. He had never felt so alive. So utterly consumed by desire he would risk everything for a kiss.

Their tongues danced together; their hearts pounded in unison. He twisted his hand in her hair and trailed kisses down the graceful column of her neck. He was a physical man, experiencing life through his body more than his mind, and right now he was overwhelmed with the need to bite her, taste her, breathe in her scent, see and touch every inch of her beautiful body, mark her, and stake his claim.

Frankie’s voice pulled him out of his lust-fueled haze, and he growled his displeasure, pulled Mia against him, driven by a primitive desire to protect the woman in his arms. Mine.

“You’re exposed. We’re in Cordano territory. You wanna take it inside?”

Before he could protest, she pulled away, leaving him standing on the sidewalk, so fucking hard he ached. She slid into her vehicle and closed the door. The roar of her engine shattered the silence on the street.

She lowered the window and blew him a kiss.

“Thanks for the ride.”

“I know every inch of this forest.
Every. Single. Inch
They won’t escape me.
Tomorrow, I hunt.”