Book Review: Burn for Me by Ilona Andrews 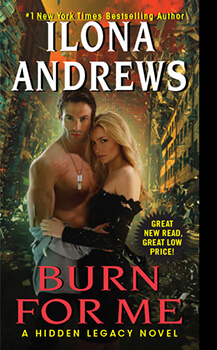 #1 New York Times bestselling author Ilona Andrews launches a brand-new Hidden Legacy series, in which one woman must place her trust in a seductive, dangerous man who sets off an even more dangerous desire . . .

Nevada Baylor is faced with the most challenging case of her detective career—a suicide mission to bring in a suspect in a volatile situation. Nevada isn't sure she has the chops. Her quarry is a Prime, the highest rank of magic user, who can set anyone and anything on fire.

Then she's kidnapped by Connor "Mad" Rogan—a darkly tempting billionaire with equally devastating powers. Torn between wanting to run and wanting to surrender to their overwhelming attraction, Nevada must join forces with Rogan to stay alive.

Rogan's after the same target, so he needs Nevada. But she's getting under his skin, making him care about someone other than himself for a change. And, as Rogan has learned, love can be as perilous as death, especially in the magic world.

Awesome start to the Hidden Legacy series by the husband & wife writing duo, collectively known as Ilona Andrews.  I am a huge fan of their wildly popular Kate Daniels Series.  Kate Daniels is one of my favorite Urban Fantasy heroine’s.  Needless to say I was eager to start this series but a bit leery.  I mean how do you beat Kate Daniels?!  Then again I said the same thing about their The Edge Series when I started it, but Ilona Andrews just can’t seem to go wrong!  The MC’s Nevada Baylor and Mad Rogan are hugely entertaining and totally loveable.  Told from Nevada’s POV I couldn’t stop grinning.

“You seem to be under the impression that I work for you and you can give me orders. Let me fix that.” I hung up.” ~ Nevada

Over a hundred years ago a serum was used to bring out magic abilities in everyone.  Those magic abilities manifested in different ways.  When people realized the danger in creating people with such powerful abilities the serum was destroyed.  But these powers were still passed down genetically.  This created a culture where status and wealth were directly related to how powerful a families magic was.  As such, having strong magical bloodlines became an obsession.  The stronger the power the higher the classification with Prime being the most powerful.

Mad Rogan is one of, if not the most, powerful Prime in Houston.  He definitely has the title of craziest!  Hence “Mad” Rogan.  He doesn’t care about anyone but himself.  His narcissism is second to none and his sociopathic tendencies are hilarious.  He’s indifferent to what others thinks and shrugs off insulting comments with a mega sized dose of sarcasm.

“Yes, I’m a hermit.  Mostly I brood,” Mad Rogan said. “Also, I’m very good at wallowing in self-pity.  I spend my days steeped in melancholy, looking out the window.  Occasionally a single tear quietly rolls down my cheek” ~Mad Rogan

Nevada Baylor is the owner of an investigation agency that she began running after her father died.

She is doing her best to keep her families firm afloat and roof over their heads.  She has a huge heart with an ‘I’ll kick your ass if I have to’ attitude.  This is one of the things I love about Ilona Andrews heroines.  They’re tough, will do what has to be done but they’re soft around the edges keeping the heroine from being obnoxiously pig headed or overly submissive.

Nevada lives with her mother, grandmother, sisters and cousins in a warehouse that serves as their place of business.  The family dynamic is priceless.  They are quirky, smart and funny as hell.  My favorite though is her grandmother! She’s a character and a half J

Unfortunately Nevada is manipulated into taking a case she doesn’t want.  She needs to track down a fugitive prime, Adam, who has a penchant for burning things down.  But how this case turns out may determine the fate of her and her family.  But she’s not the only one that wants to track down Adam.

Nevada doesn’t want anything to do with primes.  They expect to get everything they want, whenever they want, regardless of the consequences. She’ll have none of it!

Of course, Rogan is everything Nevada despises about primes.  As these two go head to head we’re taken on a wild ride through a story packed with action, magic conjuring and LOTS of sexual tension.  Wait until you see what a tactile can do…hmmm (I’m drooling as I write)!

“One school of thought says that the best way to handle an issue like this is exposure therapy,” Mad Rogan said. “For example, if you’re terrified of snakes, repeated handling of them will cure it.”
Aha. “I’m not handling your snake.”

Overall, the story keeps you guessing, is steady paced with well-developed characters.   No surprise here considering who the authors are! We even see a hint of potential for Rogan in terms of becoming, dare I say, a little less sociopathic…though I hope not too much! Part of his charm.

“It only took Romeo one look at Juliet and his fate was sealed. Maybe I’m just like my namesake, and maybe you’re just like yours.”