Book Review: Love Me to Death by Marissa Clarke 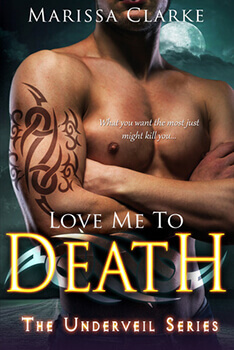 Medical research scientist Elena Arcos has always lived her life under the radar, which is not easy to do when you live with the craziest woman in the world. But eccentric Aunt Uza is a picnic compared to the other people who enter her orderly life after she is shot in a convenience store robbery.

Elena finds herself rocketed from comfortable predictability to supernatural insanity courtesy of her own private angel of death who happens to have the sexiest accent on earth and a body to match. Her death angel is convinced she’s some kind of freaky half vampire thing and that her deceased dad was the real deal: a blood sucking monster.

Yeah, right. She’ll play along, but then she doesn’t have much choice seeing how as the guy claims to be some immortal law enforcer and has taken her prisoner.

Nikolai Itzov had expected to fight the urge to torture the progeny of his father’s murderer, but he’d never anticipated battling the urge to kiss her her.

As a Slayer, an elite law enforcer descended from Azrael himself, his charge from the Underveil General is clear: Kill her or die. He has been told she is one of them--an Undead. Nothing but a parasite to be destroyed. But he has been told wrong.

Nikolai and Elena find themselves in a life and death battle to stop a plot designed to lift the Underveil and enslave humans.

With her analytical mind and his centuries of training and experience, they might be able to foil the plot with their lives and maybe their hearts intact. But in order to succeed, he must help her become the very thing he hates the most: an Undead.

Love me to Death by Marissa Clarke sucked me in from the beginning! This is the first book in the Underveil Series. It’s fun, has some quirky characters and there is A LOT of world building going on. It has vampires, elves, shifters etc so you get a little bit of everything supernatural and more!

The story opens with the heroine, Elena, being shot during a store robbery and is met with who she considers the Angel of Death standing over her. He’s beautiful and Elena thinks he’s there for her, but the next thing she knows she’s waking up in a hospital bed with all kinds of questions; what the heck happened to her and more importantly who’s that HOT guy that she really wants to drool over and what does he want with her? Her life from that point forward becomes a whirlwind of craziness and revelations about the new world she’s discovering, herself and how she fits into the madness of the Underveil.

Our hero Nikolai (aka Nik), is an enforcer for a group of Slayer’s who help uphold the laws. Years before, his father was betrayed and killed. Since then he’s been obsessed with avenging his fathers death. Elena’s the daughter of the man he believes killed his father, but when he goes to finish her off and finally get his revenge he just can’t do it. He feels an undeniable pull, even though he doesn’t want to admit it because of who and what he is.

“Wanting her was in complete opposition to his nature and purpose”

With his focus being on revenge he hasn’t been paying attention to what’s happening around him and it’s not good. His obsession with revenge could very well seal the fate of the Underveil and human world. But thankfully, he begins to question things after he meets and kidnaps Elena. Not only because of their undeniable pull but because he doesn’t believe she’s really guilty of anything. As he opens his eyes to the reality of obvious deceit and betrayal the real action starts as he tries to protect Elena and find out what’s going on and who is deceiving him.

Nik is an alpha to the extreme and yummy! He’s bossy,used to getting what he wants and that includes the feisty Elena. Elena, is quirky, caring and kickass. She won’t put up with his crap.

“Is chauvinism 101 a required course for all slayers, or is it reserved for royalty”

Hahaha. So starts the funny and sometimes angst riddled battle of wills between the two with a good dose of super-hot chemistry on the side! Had to fan myself a couple of times! LOL However, through it all they were able to grow as individuals and eventually work together to make them work as a couple.

“He was a good man who longed to do what was right, and something in her had recognized that from the moment of their dubious first meeting.”

There were definitely a couple of characters I thought were fun and intriguing. Stefan and Vlad being my favorites! Aunt Uza was a bit too batty for me, but hey, who doesn’t love a crazy Aunt!

Sometimes I suffered a bit from information overload and while the Underveil world was unique, the story itself was a little predictable and a bit too long which is why I gave it 4 starts instead of 5. But that absolutely did not take away from the entertainment and I really enjoyed it! I love these types of stories. Prophecy, betrayal, mystery and lots of steam; what’s not to like?! This was a great start to a series I hope to see more of! I’d love to hear Stefan and Vlad’s stories…