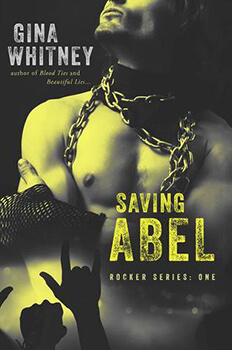 Abel Gunner, the lead singer of the band Lethal Abel, is what beautiful nightmares are made of. His gritty, melodic rasp threatens to rip your heart out of your chest and leave you gasping for the very breath he robbed you of. His kisses, detonating on impact, leave you ruined. Abel is also a Dom, and his appetite for seduction is legendary and intense. After a chance encounter with Gia, his need to dominate this woman increases tenfold. He wants to consume her, merge with her, and never leave her body.

Abel's emerald eyes touch the deepest part of Gia's soul in a way that terrifies her. She fears he can see her secret. Lies, guilt, and betrayal lay beneath her skin, and she's terrified of being exposed. How will Gia ever begin to explain? She doesn't believe she's worthy of him, and her greatest fear is that her carefully guarded heart will be shattered. However, she finds herself unable to deny this rogue tattooed rocker whose kisses just might ruin her.

This is the first book in the Rocker Series. A warning to those out there that this is NOT a standalone and ends on a cliffhanger, and it’s heartbreaking!!! So if you don’t want to replace your e-reader after chucking it against a wall and/or guzzling a bottle of tequila, I’d recommend having the next book, which is already released, downloaded and ready to go.

Gia on the other hand, not so much, at least in the beginning. After reading the blurb, I immediately formed an extreme dislike for Gia but not all is what it seems. Gia hasn’t lived the best of lives and with an evil mother constantly looking over her shoulder we start to see why. She was beginning to grow on me….sort of.

Gia works as a secretary for Abel’s lawyer father in hopes of meeting Abel. She has ulterior motives namely money and prestige. She is not your innocent girl so she plans on seducing and using him. She gets her chance when Abel and his band arrive for a meeting with Abel’s father regarding Abel’s psychotic ex-bitch Morgana, who is trying to blackmail him by exposing his certain proclivities (love of whips, floggers, bondage, controlling etc….) to the public. There is instant chemistry but Abel’s been screwed over and is afraid to get into another relationship. Not only that but Gia is not familiar with Abel’s BDSM scene and he doesn’t like dealing with untrained subs so he tries to stay away. On the other hand Gia is hiding all kinds of secrets and has no clue when it comes to relationships.

“When you signed that agreement, you gave me your mind, body and soul. Your mind will be focused on me, always. Your body will be under, on top, or spread wide open for me- always. Your soul will be intertwined with mine, forming one physical body of unity- always.” ~Abel

As they get to know each other and Gia falls hard for our sexy Rock star, she starts to realize her priorities aren’t straight. She decides that she doesn’t want the things she did before. She wants to tell Abel but before she gets the chance he finds out and some of her secrets and BAM everything falls apart from there. He loves her so much and to be, in his mind, screwed over AGAIN, let’s just say it’s not pretty. He was absolutely devastated. And that ending!!? I cried big fat tears! It was horrible!!! Stupid cliffhangers!!! Thank goodness I had the next book right beside me or I might have curled up in a little ball somewhere to recover…

I have heard of this book before! It has been put in my tbr list for so long i forgot about it haha. Now that I have been awoken from my reading slump, I am going to start devouring books like there is no tomorrow lol. Btw, I LOVE your blog, your reviews are always so refreshing to read, not to mention that we also have the same taste in book genres <3

Thank you sooo much! That means so much to me! This series is amazing! Gets better and better!
I love your blog/reviews too. I read your review of Wanderlust by Skye Warren and it was great! I love Sky Warren. I couldn’t leave a comment for some reason though:)

“Out there, King Lahn is a fierce warrior but in here, my Lahn… kah Lahn is sweet.”