For eighteen-year-old Rouen Rivoche, being a fairy princess isn’t about fancy parties and happily ever afters.

Rouen’s people are the dark Fae whose powers of lightning, thundersnow, and all things Winter make them cold, severe, and 100% intolerant of rebellion.

Too bad being a rebel is in Rouen’s blood.

Against tradition, she’s teamed up with Syl Skye, the sleeper-princess of the fair Fae—a mortal enemy who Rouen should want to kill but only wants to kiss. Plus, to be with Syl, Rouen’s masquerading as a glam goth-rock star and human high school student. Honestly, Rouen doesn’t think things could get any more complicated.

Then, she discovers she must become Queen of the Winter Court or all her people will die. No pressure.

Now, dark forces are amassing in the Winter Court, turning Rouen’s people against her and blocking her path to the throne. Even Syl with all her powers of white flame and Summer can’t stop this new kind of evil.

Because betrayal cuts close when it’s someone you love… and now it looks like Rouen’s going to be dethroned before she ever becomes queen. 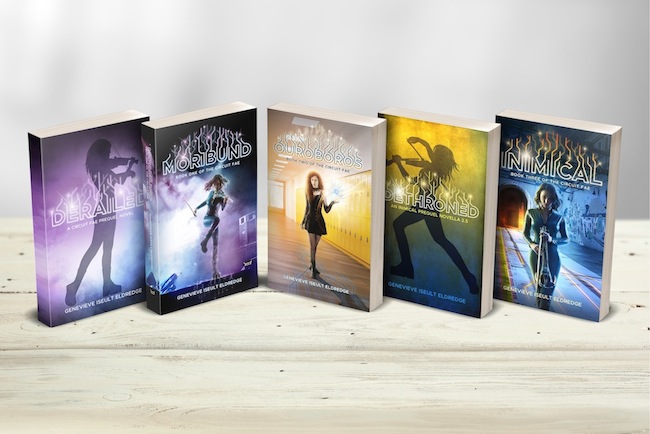 Raised by witches and dragons in the northern wilds, GIE writes angsty urban fantasy YA romance–where girls who are mortal enemies kick butt, take names, and fall in love against all odds.

She enjoys long hikes in the woods (where better to find the fair folk?), believing in fairies (in fact, she’s clapping right now), dancing with dark elves (always wear your best shoes), being a self-rescuing princess (hello, black belt!), and writing diverse books about teenage girls finding love, romance, and their own inner power.

She might be planning high tea at the Fae Court right now.

GIE is multi-published, and in her role as an editor has helped hundreds of authors make their dream of being published a reality.

Thanks so much for being part of the cover reveal for DETHRONED! <3