Anna is already aware of the men who enjoy preying on models. She knows a woman represented by her modeling agent was found raped and murdered—but she tells herself that, tragic though it was, this is New York. Such things happen. Mickey Gallo is less sanguine about the killing, but he’s both a police detective and Anna’s protective uncle. In Anna’s mind, she doesn’t need his protection. Or so she thinks.

When one murder becomes two, Anna’s confidence is shaken, but she’s determined to accept an offer to model in Italy. There, surrounded by beauty, Anna will confront the darkest side of the fashion industry. It’s an encounter she may not survive.

The buzz of the intercom surprised Rhonda. It was 11:00 p.m. and she was about to go to sleep.

The man identified himself and she recognized his name immediately. “What are you doing here?”

“Sorry. I know it’s late. I wanted to speak to you earlier but couldn’t because there were too many other models around. I may have a potential opportunity just for you.”

“Oh?” She was dead tired and the last thing she wanted was unexpected company. Nevertheless, she didn’t feel she could say no to any possible break that presented itself. She was desperate to make it in the modeling world.

“OK. Let me buzz you up.” She opened the front door and waited for the rickety vintage elevator at the far end of the hall to set in motion. It was completely black, so she turned on the hall lights. She thought about how crazy she had been to rent an apartment in a building that was mostly for commercial use. The building was totally empty at night, as was the surrounding area. It was the meatpacking district after all. No one ever showed up until around 6:00 a.m. Yes, the rent was dirt cheap, but in hindsight it was a huge mistake. How could she know any better though? She was only eighteen—a complete babe in the woods. Not only that, no one taught her anything. Growing up, her mom worked every day, and most nights, to support her and her younger sisters. Her father was nowhere in sight, never had been, so with no money and no father she knew very little about how to make decisions; she just had pure ambition. That’s what lead her to NYC, hardly a penny in her pocket, to become a model.

The clattering elevator came to a halt. Its passenger opened the scissor gate, then the double door, and exited. “Thank you for letting me up,” he said as he walked toward Rhonda.

“Hi,” she said sweetly. “Come on in.” Rhonda motioned him through the door. “I’m really sorry but I’m already in my nightgown. I was about to go to sleep.”

“Of course, it’s late.” He glanced around the miniscule studio. It was neat and barren, apart from a tiny, decrepit kitchenette, a single bed, and a small side table lined with a few of Rhonda’s modeling photos. “So, this is the apartment you were talking about?” he said, shaking his head in dismay. “You can do better than this. It’s horrible here.”

“It is, isn’t it?” Rhonda said, putting her head down with embarrassment. “Unfortunately though, I couldn’t afford more.” Regaining her composure, she smiled softly. “Anyway, the good news is I pay month-to-month, and as soon as I make some decent money modeling I’m going to move out.”

“That’s what I wanted to speak to you about.”

“Well, have a seat,” she said, laughing as she motioned to a corner at the far end of the bed. “Can I get you something to drink first?” she asked as he sat down.

“No, nothing, thank you.” He looked at her intently, following her every gesture as she perched herself down near the head of the bed.

“So you want to be a famous model?”

She nodded in agreement.

“Let’s talk about what I can do for you.”

“Terrific” she said, overjoyed by his interest in helping her.

“I think you have a lot of potential. I really do.”

Rhonda smiled eagerly and took in a big breath of air, emphasizing her svelte, perfect figure.

“It’s not easy though to make it as a model. Beautiful girls are a dime a dozen,” he said.

“I know. It’s true. I see so many beautiful models every day.”

“You’re right,” Rhonda said. She could hardly believe she may be about to get her lucky break, one that could launch her to stardom in the modeling world.

Suddenly, he reached for her arm and pulled her toward him.

“Hey, what are you doing?” Rhonda’s eager smile faded. Confused, she tried to pull away.

“You know what I’m doing, Rhonda.”

“No I don’t. You said you wanted to speak with me.”

“You want help? You want to make it big?”

“Yes, but not this way.” She struggled to get away, but her resistance made him angry.

“You know you want this. I could see it in your eyes earlier.”

“No I don’t,” she said, still trying to pull away as his fingers dug into her arms.

He didn’t loosen his grip. “You are so sexy, don’t you know that?”

“A virgin?” He pushed her back and held onto her tightly with outstretched arms, his piercing stare locking onto her terrified eyes. “I don’t believe you.”

“I am, I swear!” She tried to loosen his grip and get up from the bed. “You got the wrong impression.”

“Then why are you such a cockteaser?” His large almond-shaped eyes began to shrink as he held her firm and squinted at her with the most evil look she had ever seen.

“I’m not. I don’t know what you’re talking about.”

Pulling her closer, he kissed her hard as she desperately made futile attempts to get away.

Rhonda squirmed and dodged his attempts to kiss her, shrieking in terror. He wrestled her down on the bed, straddling her hips and pushing her down against the pillow. He smothered her face with one of his large hands, both to shut her up and hold her still. Terrified she froze.

Using his free hand, he undid his trousers and forced himself inside her. Rhonda could only whimper, too paralyzed with fear to do anything else. He grew more and more excited with each thrust, mumbling incoherent words of disgust and hatred until he reached his climax.

Rhonda bled to death in her own bed, her throat sliced with a seven-inch combat knife.

“Looks like she’s been dead a few days,” Detective Tansey said as he stared at Rhonda’s decomposing body. The ruggedly handsome man held his cool demeanor while the two officers from the crime lab covered their noses—the room was beginning to have a foul smell.

“Do you think she was a model?” Officer Kasinski asked.

“Maybe.” Tansey glanced over at the professional-looking photos of Rhonda on the nightstand. “Definitely not a famous one though if she was living in a place like this.”

“Unless she was a druggie. Could have spent all her money on cocaine or something,” Officer Smith added.

“True, seen that before.”

Kasinski checked out the bathroom and returned. “No signs of drug paraphernalia.”

Tansey searched Rhonda’s outstretched arms. “No signs of track marks either. She must have been living in this shithole because it was cheap.”

The men shook their heads in disgust at the level of violence.

“Killer didn’t just cut her throat, he damn near took her head off,” Smith said.

“Looks like she’s been raped too, judging by the bruising,” Tansey added.

“My guess is that she let him up here,” Kasinski continued. “The intercom works, and there are no apparent signs of forced entry. That is, unless he was already in the building and snuck into her apartment while she slept. The lock is a joke.”

“Or maybe she brought him home with her,” Smith countered.

“Possibly. OK, let’s get to work. We don’t need to stare at her anymore.” Tansey glanced away from the dead girl and began assessing the room for more evidence.

A few hours later, he picked up Rhonda’s telephone and called the coroner’s office. The men had collected everything that could be useful; now it was time to have the poor girl removed from the putrid, blood-soaked bed and taken to the morgue. 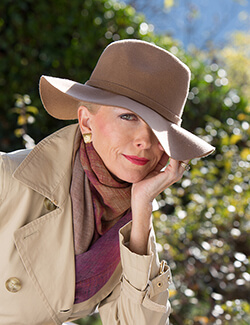 Born and educated in the United States, E. J. Moran began a career as an international fashion model at the age of eighteen when she was scouted by a top modeling agency based in Milan, Italy.

Moran’s move to Italy set in motion the rest of her career. She signed with top agents and modeled for famous fashion designers and photographers. Her work took her to Milan, Tokyo, New York, and Paris.

After marrying and starting a family, she retired as a fashion model and continued life as an expatriate in the United Kingdom, Switzerland, Singapore, and Italy, where she divided her free time between teaching English and volunteering for multiple international organizations.

Recently, she decided to put pen to paper and make fictional use of the plethora of experiences she gained during her globetrotting life. Moran and her husband currently divide their time between Europe and the United States.

Visit the other great hosts on this tour for more great reviews, interviews, guest posts, and giveaways!

This is a rafflecopter giveaway hosted by Partners in Crime Virtual Book Tours for E. J. Moran. There will be 1 winners of one (1) Amazon.com Giftcard. The giveaway begins on February 1, 2018 and runs through March 3, 2018. Void where prohibited.

This was an exciting read. Hope you get a chance to read it.

Thank you, Aurora! So thrilled to be able to share my book here.

You’re welcome! Thanks for swinging by and giving us a peek into your new book!

“How can I want to kiss you and punch you at the same time?” I ask, shaking my head.