Guest Post by Andrea Kane – Author of Dead in a Week 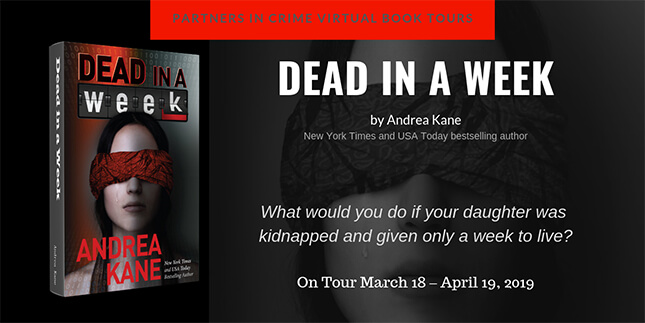 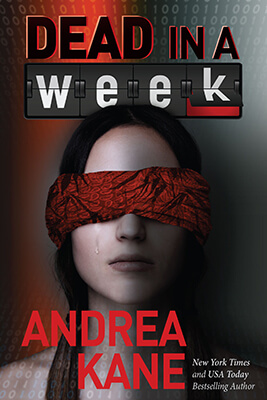 Dead In A Week

What would you do if your daughter was kidnapped and given only a week to live?

Lauren Pennington is celebrating her junior year abroad when life comes to a screeching halt. At Munich’s Hofbräuhaus, she engages in an innocent flirtation with a charming stranger for the length of a drink. Drink finished, Lauren leaves—only to be snatched from the streets and thrown into an unmarked van.

Officially, Aidan Deveraux is a communications expert for one of the largest financial firms in the world. In his secret life, the former Marine heads the Zermatt Group, a covert team of military and spy agency operatives that search the data stream for troubling events in an increasingly troubled world. When his artificial intelligence system detects Lauren’s kidnapping, Aidan immediately sees the bigger picture.

Silicon Valley: Lauren’s father, Vance Pennington, is about to launch a ground-breaking technology with his company NanoUSA—a technology that the Chinese are desperate for. No sooner does Aidan arrive on Vance’s doorstep to explain the situation than the father receives a chilling text message: hand over the technology or Lauren will be dead in a week.

In a globe-spanning chase, from the beer halls of Germany, to the tech gardens of California, to the skyscrapers of China, and finally the farmlands of Croatia, Aidan’s team cracks levels of high-tech security and complex human mystery with a dogged determination. Drawing in teammates from the Forensic Instincts team (introduced in The Girl Who Disappeared Twice), the Zermatt Group will uncover the Chinese businessmen responsible, find the traitors within NanoUSA who are helping them, and save Lauren from a brutal death.

I’ll start by admitting that DEAD IN A WEEK, my new super-fast-paced suspense thriller, was the hardest book I’ve ever written—and I’ve written almost thirty.  It required more time and more extensive research on my part than I can begin to describe.  Knowledge of international locations (particularly Croatia), industrial espionage, military tactics—the list goes on and on.

And that’s just the plot.  Then came what’s always the most important part for me: the characters.

I already had a pretty good feel for Aidan Devereaux from his appearances in previous Forensic Instincts novels and because of the fact that he’s Marc’s brother and Abby’s daddy.  Evolving him into the amazing man he is came almost as a natural process.  But the rest of the Zermatt Group’s “Core Four” lay before me, a clean slate and a totally unknown commodity.  Each one of them—Simone, Terri, and Philip—became a dynamo unto his/her own right, and yet they’re all so different from one another that I was truly overwhelmed by the process of creating them, uniting them, and making them an unstoppable team.  It was a labor of love, but tough love.

And since I won’t compromise on the characters and I won’t concentrate on their story, suffice it to say that I was totally wiped when I typed the words “The End”.

Having said all that, I have to admit that I always need to feel my own emotional or psychological pull to the book I’m writing.  In this case, that pull was the bond between parent and child.

The love a parent feels for his/her child is unique and incomparable.  And the fear of losing that child is beyond bearing, something no parent should ever have to endure.  But that’s exactly what Vance and Susan Pennington had to live through.  They suffered all the pain and sense of helplessness as the clock ticked by, knowing their college-aged daughter was being held in a foreign country by brutal terrorists, that securing her future was in the hands of The Zermatt Group, and that there was little or nothing they could do—other than to follow instructions and to wait.  Patience?  When your child’s life is on the line with one week to live?  That’s like asking a starving person not to eat the food placed in front of them.

Added to that, I found myself gravitating toward the parallel between the love Lauren Pennington’s parents feel for her as they endure the horrific week of her kidnapping and Aidan’s love for Abby (who’s now 4-years-old) and his own fierce protectiveness where it comes to her.  There’s not a doubt in my mind that he was partially tormented by Lauren’s kidnapping because of his own thought: “That could be Abby”.  For me, the entirety of that emotional aspect of the story made the book a stronger, more memorable read.  I hope you feel the same way! 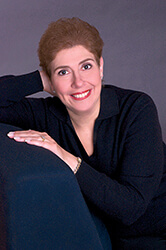 Andrea Kane is the New York Times and USA Today bestselling author of twenty-nine novels, including fifteen psychological thrillers and fourteen historical romantic suspense titles. With her signature style, Kane creates unforgettable characters and confronts them with life-threatening danger. As a master of suspense, she weaves them into exciting, carefully-researched stories, pushing them to the edge—and keeping her readers up all night.

Kane’s first contemporary suspense thriller, Run for Your Life, became an instant New York Times bestseller. She followed with a string of bestselling psychological thrillers including No Way Out, Twisted, and Drawn in Blood.

Her latest in the highly successful Forensic Instincts series, Dead in a Week, adds the Zermatt Group into the mix—a covert team of former military and spy agency operatives. With a week to save a young woman from ruthless kidnappers, this globe-spanning chase, from the beerhalls of Germany, to the tech gardens of California, to the skyscrapers of China, and finally the farmlands of Croatia will keep readers guessing until the very end. The first showcase of Forensic Instincts’ talents came with the New York Times bestseller, The Girl Who Disappeared Twice, followed by The Line Between Here and Gone, The Stranger You Know, The Silence that Speaks, The Murder That Never Was, and A Face to Die For.

Kane’s beloved historical romantic suspense novels include My Heart’s Desire, Samantha, Echoes in the Mist, and Wishes in the Wind.

With a worldwide following of passionate readers, her books have been published in more than twenty languages.

Kane lives in New Jersey with her husband and family. She’s an avid crossword puzzle solver and a diehard Yankees fan. Otherwise, she’s either writing or playing with her Pomeranian, Mischief, who does his best to keep her from writing.

I read this book and was so impressed with the details. It was evident that there must have been extensive time put into the research. And I can also say it was definitely a page-turning read!!

I really enjoyed having the chance to introduce Aidan and the Zermatt Group here (and to tell you all how hard this book was to write!). Many thanks for showcasing Dead in a Week!