Hilary has one goal for her first year in junior high: to become popular. But her plans are turned upside down when her best friend leaves for the summer and a quirky girl named Kallie moves in next door. Kallie paints constellations on her ceiling, sleeps in a hammock, and enacts fantastical plays in front of cute boys on the beach. Yet despite Kallie’s lack of interest in being -cool, – Hilary and Kallie find themselves becoming friends. That summer friendship, however, is put to the test when school begins, reigniting Hilary’s obsession with climbing the social ladder. As Hilary discovers the dark side to popularity, she must decide who she wants to be before she loses everything.

Bullying is one of the main themes of my young adult novel, The History of Hilary Hambrushina. To coincide with Pink Shirt Day, a Canadian anti-bullying initiative, I recently asked several people about their experiences with bullying. Their honest, thoughtful responses broadened my understanding of bullying and several key issues surrounding it. (All names used here are pseudonyms.)

I was struck by the range of ages at which my respondents experienced bullying, which is often thought of as a teen problem. Many people did indeed recall being bullied by classmates in junior high school. Yet bullying begins at a young age and continues into adulthood. Stacey’s daughter was picked on by a classmate in junior kindergarten, and Vanessa and Bonita in elementary school. Ingrid was targeted by her colleagues and Bert by his boss in the workplace. Respondents were taunted for various reasons, including physical characteristics: Rick for his “big nose,” Bonita her “dirty ears,” and Gabrielle her pale skin. As an immigrant new to Canada, Carmen was mocked by her classmates for her clothing and lunches. She attributes this jeering to cultural and class differences between her and her peers.

I also wondered about the level of support provided to the bullied by individuals and institutions in whom the bullied confided. Most respondents did ultimately tell someone, usually a family member or friend, about their ordeal. While most confidants were supportive, Nicole recalls a different experience with her parents: “[My mother] would also tell me I needed to try better to fit in—and not be so strange.” Stacey had a positive experience with institutional support. When she spoke to her daughter’s teacher about the teasing, the teacher offered to look out for any bullying and invited Stacey’s daughter to speak to her (the teacher) about any incidents. This support empowered Stacey’s daughter, giving her “the confidence she needed to deal with the situation better herself so she never did go to the teacher about it.”

For most people, however, institutional support was lacking. Several respondents indicated that while individual teachers were sympathetic and would try to stop bullying, these on-the-spot interventions resulted in only a pause in the taunting. Sadly, some educators simply ignore or refuse to deal with bullying. According to Gabrielle, “[the vice-principal] said that the school couldn’t really do much since kids would always be kids.” Vanessa was pushed into a wall in full view of her principal, who did nothing to help. She says, “Whenever I went to talk to my teacher about [the bullying], he would put up his hand and say, ‘I don’t want to hear about it!’” The situation had to escalate to an extreme level—the bullies threatening to shoot Vanessa—before the school finally took action. The only support Bert received in the workplace was a meeting in which Human Resources told his boss not to call Bert names. The boss agreed, then promptly broke his promise as soon as the meeting had ended. Nicole was even berated by her principal for defending herself against a group of classmates who were physically attacking her. Her daughter has fared better: When she is bullied, the school allows her “to leave her classroom (or any area of the school) immediately without having to ask permission and enter the office where she [can] sit on the couch.”

Respondents were also lukewarm about the effectiveness of anti-bullying programs in schools. While several felt that schools’ handling of bullying has improved in recent years, others emphasize that much more needs to be done. “I don’t think celebrating one day [Pink Shirt Day] helps,” says Vanessa. Carmen feels that even with anti-bullying programs in place, “unless the parents are big advocates and can demonstrate a level of assertiveness, not much is done.” Ingrid has an interesting take on such programs: “Current efforts place the power to stop the bullying with the bully.” Instead, she argues, programs should focus on “empowering those who are being bullied to respond in socially appropriate and effective ways using real world examples.” Bonita, a teacher, laments, “Since I am an occasional teacher, I don’t have the opportunity for extended periods of time to help children who bully and children who are bullied. I feel like I provide more of a Band-Aid response.” And even the best school anti-bullying programs can’t protect children outside of school, as Nicole’s daughter discovered. Once her bullies knew that the principal was powerless to punish them for bullying that didn’t occur on school property, they simply moved their tormenting off the playground and into the street.

For my respondents, the impact of bullying has been profound and long-lasting. psychological wounds such as low self-esteem, high self-doubt, and wariness of others are common, even years after the tormenting ended. Rick admits that being bullied has resulted in “a narrative of self-loathing that continues until today…. It’s like sharing headspace with both Siskel and Ebert; every [Rick] review is two thumbs down.” Ingrid confesses that “it’s been a long road to feel like an equal to my peers.” After Bert quit the job at which he was being bullied, his experience with workplace harassment caused him anxiety in his subsequent jobs.

Yet bullying has also resulted in positive self-growth for many respondents. Stacey believes that her daughter is now “more empathetic, faith-filled, and has a stronger sense of self.” Surviving bullying has emboldened Gabrielle “to take more risks in life.” Rick extends compassion to everyone he meets and stands up for those being bullied. Carmen has harnessed her experience “to support others who don’t feel that they have a voice.” Perhaps the words of twelve-year-old Vanessa, the youngest questionnaire respondent, offer the most hope to those currently suffering through this trauma: “For others out there that are bullied, keep your chin up and know that you ARE strong, you ARE good, you ARE beautiful, and you ARE smart! And most important, you ARE worth it!”

I put on a sweatband and sneakers and brought down a water bottle. My plan was to pedal non-stop for an hour. I figured I could do it, since I was used to riding my own bike, and how different could this bike be? I should lose at least one pound that way, I told myself. So if I use the bike every day, in fifteen days I’ll have lost the weight I want to lose.

I stepped over boxes and piles of books to reach the bike, which sat in a dark corner. This corner had a musty smell, like an old church that hadn’t been dusted since Queen Victoria was my age. A fake raccoon-fur hat someone had given my dad as a joke hung on the wall nearby.

The bike seat was too high for me, but I couldn’t move it because it was screwed in place. Gripping the handlebars for support, I tried to heave my leg over the seat several times without success. I was becoming angry and sweaty, so I started breathing deeply, like I was having a baby, to calm myself down. “Hoo hoo hoo.”

“Hilary!” shouted my mom. “Why are you making monkey noises?”

I froze. I knew that if I said, “It’s nothing,” she’d come down, and I didn’t want her to think I needed help getting on a stationary bicycle. So I called, “I’m just playing a game.”

I managed to lift myself on to the bike. I had to stretch to reach the pedals, but I finally did and started pumping. It was O.K. at first, but soon, my muscles felt like some psycho was using them as rubber bands. And some people actually do this for fun! What’s wrong with them, I thought. I reached for the water bottle and tried to squirt some water in my mouth. Nothing but air came out. I’d forgotten to fill the bottle! I threw it away and continued to pump furiously. Objects on the wall began rattling, and I was making so many strange noises my mother must have thought a whole pack of monkeys was performing a conga line in the basement. I began to have visions of monkeys in spangly pink bikinis
kicking up their heels (did monkeys have heels, I wondered) on stage at the Princess of Wales Theatre.

Suddenly my sweatband fell over my eyes. I didn’t stop to fix it, though. You’re going to pump for the full hour, not for fifty-nine minutes, I ordered myself. Instead, I tried nodding vigorously to get the sweatband to fall under my chin. It fell over my nose and I couldn’t breathe. Then something dark and furry leapt on my head, covering my eyes and tickling my face like a bunch of feathers. I screamed, batting at the thing with one hand and pumping frantically, as if I could escape that way. I soon realized it was only my dad’s hat, but I still couldn’t get it off. Finally I stumbled off the bike and yanked the hat’s tail away from my eyes.

I had no energy left to remove the hat, so I left it on and trudged upstairs. I passed my mom, who took one look at me and started to snicker. Ignoring her, I went into the kitchen to check the clock. I’d been on the bike five minutes.

So that was the end of my experiment with exercising. 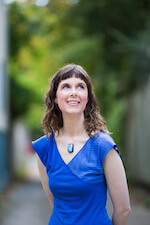 A Journey Prize nominee, Marnie Lamb earned a master’s degree in creative writing from the University of Windsor. Her short stories have appeared in various Canadian literary journals. Her first novel, a YA book named The History of Hilary Hambrushina, is forthcoming from Iguana Books. When she is not writing fiction or running her freelance editing business, she can be found cooking recipes with eggplant or scouting out colourful fashions at the One of a Kind Show.