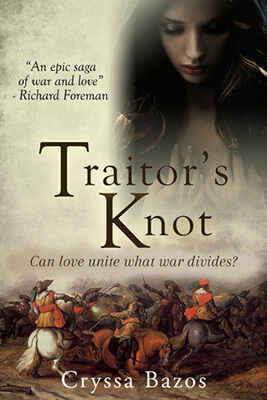 England 1650: Civil War has given way to an uneasy peace in the year since Parliament executed King Charles I.

Royalist officer James Hart refuses to accept the tyranny of the new government, and to raise funds for the restoration of the king’s son, he takes to the road as a highwayman.

Elizabeth Seton has long been shunned for being a traitor’s daughter. In the midst of the new order, she risks her life by sheltering fugitives from Parliament in a garrison town. But her attempts to rebuild her life are threatened, first by her own sense of injustice, then by falling in love with the dashing Hart.

The lovers’ loyalty is tested through war, defeat and separation. James must fight his way back to the woman he loves, while Elizabeth will do anything to save him, even if it means sacrificing herself.

Traitor’s Knot is a sweeping tale of love and conflicted loyalties set against the turmoil of the English Civil War.

“A hugely satisfying read that will appeal to historical fiction fans who demand authenticity, and who enjoy a combination of suspense, action, and a very believable love story.” – Elizabeth St. John, author of The Lady of the Tower

Traitor’s Knot is available in eBook & Paperback at Amazon

Please tell us something about yourself and how you came to be a writer.

Cryssa:  Normally readers become writers but I think it was the other way around for me. I have always been a writer even before I could read. As a child I wrote on any surface that I could find. My favorite then was the flat forehead of a rubber doll. I still have that doll. My earliest publication was a skit for a high school play. I poured out my heart in a piece about unrequited love. I can’t even recall the subject of my desire, so there you go. A box of tissue was sacrificed for my art, and I proudly submitted the tear-stained manuscript. I thought nothing more of it, but to my astonishment on opening night, I heard my words played back to me—with a twist. They had turned my teenage angst into a comedy! After a few moments of speechless horror, I decided the change was brilliant.

My next foray into writing was a few years later when I tried to co-write a historical romance. Instead of an easy subject, like a drawing room drama set in Jane Austen’s world, we threw our hero and heroine into the French Revolution. Easy subject, that. The manuscript remains locked in the land of obsolete floppy discs where it will never see the light of day. But what I did get from that experiment was to learn how NOT to write a novel. Years later, when I decided to try my hand again at writing I chose a different revolution, this time the English Civil War.

What do you feel are the unique challenges to writing a historical romance?

Cryssa:  Readers have an expectation as to how it should turn out, but the story can’t be predictable. The writer needs to find a balance between delivering what their readers are hoping for while keeping it fresh, and hopefully pushing the envelope to deliver something different. There are certain obligatory scenes we all wait for: the first meeting between the couple, the first kiss, and that realization that they are meant to be together. How to make them unique and different? That is a huge challenge.

In addition to getting the romance right, the historical writer needs to faithfully build the historical world, getting the details right so that the reader feels they have stepped into the past. Too much history, you have Wikipedia. Too little, the story would feel as though it could be set anywhere. Achieving the right balance is also a huge challenge.

For both the romance and the history, the key is to let the character drive the story instead of the author (or the historical facts).

Are there other genres you’re interested in writing in?

Cryssa:  My first literary love was fantasy, and it’s a genre that I really enjoy dipping into when I’m taking a break from historical fiction. I’m not so interested in high fantasy (Tolkien is the exception), but magical realism certainly piques my interest. When I finish this series, I might combine my love for historical fiction with fantasy and explore historical fantasy. There would have to be a magical cavalier somewhere and a romantic interest (a must have for any story). It would be an interesting way to explore the ‘what if’s’ of history and alternative outcomes.

Can you tell us a bit more about your new release Traitor’s Knot?

Cryssa: Traitor’s Knot would be best considered as historical fiction with strong romantic elements. The story is told through the two main characters, Elizabeth Seton and James Hart. At the heart of Traitor’s Knot is a central love story, but I’ve chosen to throw my couple into one of the most turbulent eras of English history. Politics, war and conflicted loyalties conspire to keep my couple apart.

Elizabeth comes from a long line of herbalists, but the war has ripped apart her community. A few years have passed since the cessation of hostilities, but wounds are still raw, and she finds herself shunned because her father sided with the losing side. She has an opportunity to build a new life with her late mother’s sister, but she keeps getting pulled into a brewing conflict.

James has had everything of importance ripped away from him following the war. He was once a respected Royalist officer who now has to accept that the enemy rules the country—which he can’t. To him, the new rulers are traitors and usurpers, and he sets himself against them any way he can. He’s very much trapped by the injustices of the past.

The story is about conflicted loyalties. A man is called to war and his honor demands that he answer. What does that mean for those he loves?

What kind of research did you do for this book?

Cryssa:  I always had an interest in the 17th century and many of my favorite books take place during that time, so I already had a feel for the era before writing this story. To dive into the politics and social upheaval of the time, I used a mixture of contemporary historical accounts, primary sources, and I’ve reached out to local historians and re-enactors. I’ve visited the places that I’ve written about, tracing the steps of those who fought at Weymouth and at Worcester.

What did you enjoy most about writing this story?

Cryssa:  I really enjoyed developing the relationship between James and Elizabeth. Some of my favorite scenes were ones where they were either verbally sparring or those quiet moments when they were discovering their common ground and connecting on a more intimate level.

What gave you the most trouble with this story?

Cryssa:  The length. I have a tendency to overwrite. I envy the writer who can keep it brief, though in my defense, I was delivering two intertwined storylines with a fairly meaty historical backdrop. I found that when I tried to cut the story down to a more compact length, I found that I lost some of its soul. Fortunately, I had an excellent editor who accepted that the story would be as long as it needed to be.

Cryssa:  Traitor’s Knot is the first in a series that will end with the restoration of King Charles II. I’m currently working on book two, which focuses on one of the characters in Traitor’s Knot who becomes a prisoner of the Parliamentarians (no spoilers!). The adventure continues but in a more exotic setting of the Caribbean. James and Elizabeth will return in subsequent stories.

What question do wish someone would ask about you or your book, but nobody has? (then answer it:))

Cryssa: What inspires my writing?

Music is central to my writing process, and I create soundtracks for the characters and the scenes. Melody and lyrics help me tap into the emotional core of the scene. Loreena McKennitt’s Highwayman is haunting and evocative. It makes me think of a couple that will sacrifice themselves for each other. Elton John’s “I Need You To Turn To” is how I imagine James feels about Elizabeth. There’s a vulnerability that comes through in that song that tugs at my heart. The soundtrack for “Last of the Mohicans”, with it’s booming sound and drums, was perfect for getting in the mood for writing an epic battle scene. And finally, Nightwish’s “The Islander” calls to mind sea spray and the rise and fall of a ship on the waves, bringing me closer to Elizabeth’s roots in Dorset. 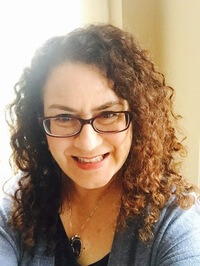 Cryssa Bazos is a historical fiction writer and 17th Century enthusiast, with a particular interest in the English Civil War (ECW). She blogs about English history and storytelling at her blog, the 17th Century Enthusiast, and is an editor of the English Historical Fiction Authors blog site.

Cryssa’s debut novel, Traitor’s Knot, a romantic tale of adventure set during the English Civil War. Traitor’s Knot is the first in a series of adventures spanning from the ECW to the Restoration and is now available from Endeavour Press.

She always wants people to ask what her muse is. I love it! I think too often we tend to forget about this important aspect.

It is so interesting to peel back the layers, what a fun interview!

Thanks! Cryssa Bazos was great 🙂

“You’re in deep with me, aren’t you, baby?”
I whispered my question just to confirm.
“Drowning.” he whispered back.”