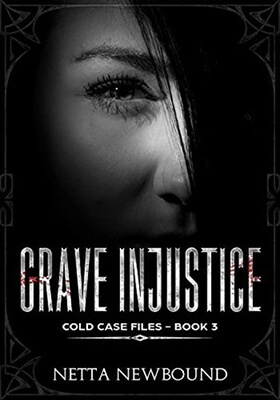 Geri and James return in their most explosive adventure to date.

When next door neighbour, Lydia, gives birth to her second healthy baby boy, James and Geri pray their friend can finally be happy and at peace. But, little do they know Lydia’s troubles are far from over.

Meanwhile, Geri is researching several historic, unsolved murders for James’ new book. She discovers one of the prime suspects now resides in Spring Pines Retirement Village, the scene of not one, but two recent killings.

Although the police reject the theory, Geri is convinced the cold case they’re researching is linked to the recent murders. But how? Will she regret delving so deeply into the past?

What would you say is a typical day in the life of Netta Newbound and how do you find time to write?

Netta:  My working day begins around 8am. I check emails and fb messages before getting stuck in. It’s not always writing, I also do a lot of editing formatting and proofreading for a number of my author friends. After dinner, I continue working in front of the TV until bed time. My husband says I’m obsessed.

What types of scenes do you find the most difficult to write and why?

Netta:  Romantic scenes are the hardest for me – I’d rather my characters kill each other than kiss each other, lol.

What do you feel are the unique challenges to writing Psychological Thrillers?

Netta:  To amp up the tension is difficult, unlike action thrillers, psychological thrillers are generally slower paced but require the same if not more tension.

You’ve mentioned various times in interviews and on your website that Stephen King is one of your inspirations.  I love Stephen King too!  What about his writing and/or stories appeals most to you and has it impacted how you approach your writing?

Netta:  One of my all time favourite books is Pet Sematary it affected me for years after reading it. I’d love to evoke those kinds of feelings in a reader.

If you could describe this book in 3 words what would it be?

Can we expect to see more of Geri and James?

Netta:  I hope so. I’ll listen to my readers and if they want more then who am I to argue? 🙂

Netta Newbound is the author of twelve popular thriller novels/novellas to date including the Adam Stanley Thriller Series and the Cold Case Files. Her debut psychological thriller, An Impossible Dilemma, shot up the charts in 2015 in both the UK and US reaching #1 in several thriller and horror categories. This rapid success gained Netta a name for herself in the thriller genre. The Watcher, another of her bestsellers that reached the top 20 in the Amazon chart, was published through Bloodhound Books, who will also publish her next book, Maggie, in October 2017.

Originally from Manchester, England, Netta has travelled extensively and has lived and worked in a variety of exciting places. She now lives in New Zealand with her husband. They have three grown up children and four grandchildren.

Thanks so much Aurora xx

You’re welcome! Thanks for the great interview:)

Just love love love Nettas books..I am now reading them for a second time..waiting for her next book to come out..have become a major fan

What i do not understood is in truth how you are not really
a lot more smartly-preferred than you might be right now.

You are very intelligent. You realize therefore
considerably with regards to this matter, produced
me individually believe it from numerous numerous angles.

Its like men and women are not involved until it is one thing to accomplish with Woman gaga!

Your individual stuffs nice. Always take care of it up!

That is interesting! I’ve been hunting for a place like this for quite a very long moment.

Thanks for another magnificent post. The place else may anybody get
that kind of information in such an ideal way of writing?

I have a presentation next week, and I’m on the search for such info.

“I always knew I would fall in love with you,” he said softly, “but you were never supposed to love me back.”

— Priscilla Glenn, Back to You