Q & A with Kelly Braffet – author of The Unwilling 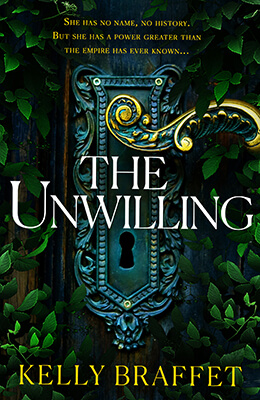 The Unwilling: A Novel

For fans of S.A. Chakraborty’s City of Brass, Patrick Rothfuss’ The Kingkiller Chronicles, and George RR Martin’s The Game of Thrones, this high concept medieval/high fantasy by Kelly Braffet is a deeply immersive and penetrating tale of magic, faith and pride.

The Unwilling is the story of a young woman, born an orphan with a secret gift, who grows up trapped, thinking of herself as an afterthought, but who discovers that she does not have to be given power: she can take it. An epic tale of greed and ambition, cruelty and love, the novel is about bowing to traditions and burning them down.

For reasons that nobody knows or seems willing to discuss, Judah the Foundling was raised as siblings along with Gavin, the heir of Highfall, in the great house beyond the wall, the seat of power at the center of Lord Elban’s great empire. There is a mysterious–one might say unnatural connection–between the two, and it is both the key to Judah’s survival until this point, and now her possible undoing.

As Gavin prepares for his long-arranged marriage to Eleanor of Tiernan, and his brilliant but sickly younger brother Theron tries to avoid becoming commander of the army, Judah is left to realize that she has no actual power or position within the castle, in fact, no hope at all of ever travelling beyond the wall. Lord Elban–a man as powerful as he is cruel- has other plans for her, for all of them. She is a pawn to him and he will stop at nothing to get what he wants.

Meanwhile, outside the wall, in the starving, desperate city, a Magus, a healer with a secret power unlike anything Highfall has seen in years is newly arrived from the provinces. He, too, has plans for the empire, and at the heart of those plans lies Judah. The girl who started off with no name and no history will be forced to discover there’s more to her story than she ever imagined.

Q & A with Kelly Braffet – author of The Unwilling

Q: The Unwilling is your fourth published book. How are you feeling? Is the excitement from the first book still running high with your fourth?

A: It’s my fourth published book, but it’s my first fantasy novel, so it feels a little like my first novel! Obviously some of the mechanics of having a book out are more familiar (like blog tours!), but it’s hard to not be anxious about a book release. This is a huge project; I’ve been working on it for twenty years, and will hopefully be working on it for several more. Right now I’m really just trying to immerse myself in writing the sequel so I don’t spend too much time obsessing about the first one.

Q: The Unwilling is different from anything you’ve ever written. Why the change in genre, and what was the inspiration? Were there any challenges that came about from writing in a new genre?

A: I’ve always been a fantasy reader, and I do mean always. I remember bringing my parents’ copy of Lord of the Rings to school in second grade – mostly because it had a cool spooky cover, but still. The first ideas I ever had for stories were for fantasy, and in fact The Unwilling was the first novel I ever seriously tried to write. After my last novel, Save Yourself, came out, I spent about a year and a half working on another crime novel that just never took off, and when I finally gave up on it my agent suggested I try to write a draft of the fantasy novel I’d been talking about forever. I’ll always be grateful to her for that, because one of the things holding me back had been the concern that she wouldn’t be interested.
As far as challenges go, I think there’s a tendency in fantasy novels to go a bit lofty with language, and I didn’t escape that. This sounds silly, but in the early chapters, I had to remind myself to use contractions, which is a problem I never had when writing about a guy who works in a convenience store. And so much of our language comes from technology that doesn’t exist in Highfall – light switches, computers, telephones – that I had to really think about the words and images I used to make sure that they weren’t anachronistic, although I’m sure a few anachronisms slipped in. I also did a lot of thinking about the mechanics of everyday life; do they have plumbing? Where does their coffee come from? What happens when they get sick? We don’t think much about those things in contemporary life, but we probably should.

Q: What is your favorite under-appreciated novel and why?

A: I’m not sure exactly what’s considered under-appreciated, so here are some books that I’m baffled don’t have more Goodreads reviews. There’s a wonderful series by Nathan Larson called The Dewey Decimal System, which is about a man who lives in post-apocalyptic New York City and has taken it as his duty to protect the NYPL. Things don’t go as planned. All three of the books are incredibly fun. Adam Christopher’s Ray Electromatic Mysteries are just a joy, particularly for somebody who loves a good genre-bender as much as I do. Science fiction and classic-style noir? Sign me up.
Beth Lewis wrote a great novel a few years ago called The Wolf Road, which is an amazing (also post-apocalyptic!) road novel with a twist that I still think about on a pretty regular basis. More people should definitely read that. And Jenni Fagan’s books are both amazing – The Pantopticon was just adapted for the stage by the National Theatre of Scotland, but I loved The Sunlight Pilgrims just as much. Also, why don’t more people read Louis Bayard? That baffles me. His YA novel, Lucky Strikes, made me weep with joy.

Q: What does literary success look like to you and with that definition in mind, are you successful?

A: The problem with success – and I’m sure this is true for every field, not just the literary – is that the goalposts are constantly moving. If you’d asked me this question when I was 22, literary success would have been signing with an agent. At 25, it would have been getting a book published. My personal goal with every book has been, first, to publish the best book I could possibly write, and second, to sell enough copies of said book that somebody will be willing to publish the next one. I mean, look: who doesn’t want to sell a gajillion copies and win all the prizes? But at this point in my career, I feel like the next goalpost is to feel confident that I’ll be able to sell the next book, whatever it is.

Q: Out of all your writings, published and unpublished, which is your favorite?

A: My favorite book is always the one I haven’t written yet. Which is kind of a joke, but also kind of serious: the ones that only exist in my head are still all shiny and full of potential. It’s hard to look at the ones that I’ve already written and not see the things I didn’t manage to do. I am still pretty proud of Save Yourself, although there are aspects of it that I wish I’d written differently. Honestly, I think The Unwilling is the most fully realized. I would say that I love the sequel I’m working on right now even more, but it’s still at that awkward stage where it all feels rough and terrible. (I think most writers will agree that it’s incredibly difficult to go from a very polished piece of work to a rough draft!)

Q: What has been the most difficult thing about writing not just this book, but a book with cross over potential geared towards young adults?

A: Honestly, this is going to sound like one of those canned answers, but I don’t really think about that when I’m writing. (Maybe I should!) I just write the story in the way that feels true, and trust that we’ll all be able to figure out the marketing afterward. I will say that there was a moment early on when I was talking to my agent about crossover potential, and I said that I was fine with it as long as I didn’t have to cut anything, content-wise. Fortunately YA today is a pretty broad and forgiving umbrella, so that wasn’t a concern.

Lots of writers will rail against labels like YA – or thrillers, or literary fiction. Honestly, I want my books to go on the shelves where my readers are most likely to find them, and the more shelves, the merrier! When I was an actual young adult, I read adult fiction. My mother, whose adult bonafides are without question, reads young adult fiction. Everything is for everyone.

Q: What advice would you give to new and even experienced authors?

A: Actually, I was just talking with an author friend yesterday about this very thing. The only advice I have – and experienced authors know this, but most of us have to be reminded occasionally – is that the only way to write a book is to write it. I meet so many people who, when they hear I’m a writer, will tell me with enormous enthusiasm about their awesome book idea; and that’s great! Awesome book ideas are awesome! But you actually have to write the book – the entire book – and then you have to write it over again four or five times. That’s the hardest part. (Also, have a trusted love one screen your internet reviews, and only read you the ones that are laudatory or hilarious. But if a negative review should cross your path and break your heart, I suggest looking up a book you loved on one of the book sites, and reading that book’s bad reviews. It will be baffling, and it might make you feel better.) (Also, don’t let bad reviews break your heart. It’s an opinion. Life goes on.) 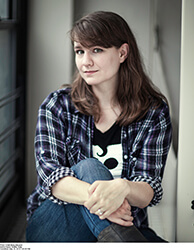 Kelly Braffet is the author of the novels Save Yourself, Last Seen Leaving and Josie & Jack. Her writing has been published in The Fairy Tale Review, Post Road, and several anthologies. She attended Sarah Lawrence College and received her MFA in Creative Writing at Columbia University. She currently lives in upstate New York with her husband, the author Owen King. A lifelong reader of speculative fiction, the idea for The Unwilling originally came to her in college; twenty years later, it’s her first fantasy novel. Visit her at kellybraffet.com.

She looks so young to have been working on this book for 20 years! I enjoyed this one, but it was definitely a commitment. I’d consider her first fantasy novel a success!