Q&A With Michelle Sagara – Author of Cast in Wisdom 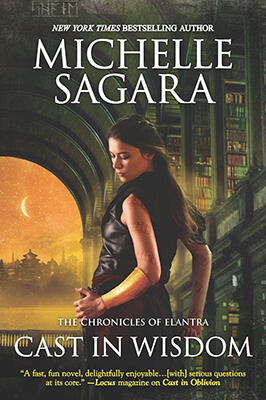 In the aftermath of the events in the High Halls, there are loose ends. One of those loose ends is the fieflord, Candallar. In an attempt to understand his involvement—with the Barrani, with the High Court, and with the much hated Arcanum—Kaylin has been sent to the fiefs.

She has mixed feelings about this. There’s nothing mixed about her feelings when she discovers a very unusual building in the border zone between two fiefs, and far more questions are raised than are answered. Her attempt to get answers leads her back to the Imperial Palace and its resident Dragon librarian, the Arkon.

Things that were lost in the dim past were not, perhaps, destroyed or obliterated—and what remains appears to be in the hands of a fieflord and his allies—allies who would like to destroy Kaylin’s friends, the Emperor, and possibly the Barrani High Court itself. This is bad.

What’s worse: The librarian who hates to leave his library has a very strong interest in the things that might, just might, have been preserved, and—he is leaving his library to do in person research, no matter what Kaylin, the Hawks, or the Emperor think.

He is not the only one. Other people are gathering in the border zone; people who believe knowledge is power. But power is also power, and it might be too late for the Empire’s most dedicated Historian—and Kaylin and her friends, who’ve been tasked with his safety.

Q: Your Chronicles of Elantra series is 15 books deep. How do you keep up with the characters and the plot? What do your notes look like?

A: I have a wiki that is not online, and I attempt to keep it updated as I write. This is not always as easy or tidy as it sounds. The wiki (I use VoodooPad) is easily searchable, but I have to remember to search it, and sometimes I don’t.

I am not a visual person, at all. I’ve mentioned this elsewhere, but I had known my husband for years, and it wasn’t until someone in the store asked what color his eyes were that I realized I didn’t know. Since he’s blond (Finnish on his mother’s side), I assumed that they were blue, and after some thought said, “probably blue”, which caused mild confusion. Had I not known my husband for years? I went home and this time looked and paid attention to what I was seeing: they were blue.

Because eye color had not–obviously–been of great import to me, eye color was the start of my note-keeping. I needed to try to track eye color of characters because I knew I’d forget. And… I still got it wrong between books. T_T.

But… the internals of the characters–what they want, where they’ve come from, the experiences that produced them, I viscerally know. Height? No, not really. Shape? Well, I remember which ones are human, Barrani, Dragon, Tha’alani, etc. Hates? Likes? Yes. Goals as well, if they have them. I remember their place in the hierarchies they occupy, because in some ways, that’s part of their interior makeup.

But sometimes, when in the flow of the words, I… don’t remember to go and check the wiki for the details that, in the moment of writing, aren’t important to me.

My notes, however, and all cross-linked to each other, because of the wiki format.

Q: What kind of research do you do for your books? Is it mandatory (for you) for all your books?

A: It’s very much on a book-by-book basis. At this point in the writing, most of the research is… all the previous books.

I have had books which are more research intensive, but in general I read history in bits and pieces, and file away what I’ve read. It becomes part of the mental soil from which books grow.

So, there are specific books in which I realized, as I was writing, that I didn’t know something that I needed to know, and that stopped the writing dead as I then attempted to find answers to the questions that arose from my own ignorance. I think, as I get older, I realize far more easily when I don’t know something and need to know it.

But I’m what’s generally called a pantser. I don’t have a plan when I start; I usually only have the ending. To know exactly what I don’t know and need to know is therefore not entirely predictable.

…and I admit that once I’ve started building bits and pieces of world, I become increasingly impatient because I just want to dive in and start writing. So sometimes I start, write, and then stop because something a specific character would know, I don’t know. And then I set the book aside and start to look at things.

Q: What is it about fantasy that makes you love it above any other genre?

A: This is a harder question to answer, because it’s so specific; it’s entirely Michelle-context. Does that context overlap with other readers? Yes. But not all of it, and not simultaneously.

I’m a product of my culture, my reading culture, and my linguistic limitations; I speak only English, and can only read French with a fifty percent chance of understanding it.

So: books I read and loved when young had fantasy elements, were fantasy. I read a lot of fairy tales. Anything I could get my hands on. Portal fantasy like the Narnia books. Fantasy like McKillip’s Forgotten Beasts of Eld. Fantasy like The Hobbit, and eventually, Lord of the Rings.

I also read a lot of mythology books–at first for kids, and later, translations of plays and sagas that hadn’t been written with children in mind.

I read other books, books without fantasy elements, growing up–but the things that spoke to me most strongly were those. They were the books of my developing reader heart. As I traversed the divide between childhood and not-childhood (does anyone truly ever feel adult on the inside of their own head? I always feel like I’ve gotten better at performing adulthood, but I can’t quite feel it as my base state), I found other fantasy. I also found books like The Left Hand of Darkness.

And all of the reading overlapped with life experiences; everything on the inside of my head, like the soil out of which story grows and evolves.

I loved fantasy as a reader. I loved reading as a reader. When I made the choice to start writing, I wrote what I loved.

Q: If you didn’t write, what would you be doing?

A: I cannot actually answer that question, because I have always written. From about six years of age, on. I didn’t write for other people, and I hid all my writing because I didn’t want to open it up to judgement and criticism.

If you mean, what would I do to make money, I’m not sure. Work, yes–but I’m not sure doing what. I didn’t expect, growing up, that my work would be my life; a job was a necessity, because having a roof over one’s head and food on the table was a necessity. I didn’t therefore pursue a career about which I could be passionate until I started to write for submission.

If I worked for someone else for a living, I would still write, because I always did. Would I write as often or as consistently? Probably not. There were gap months in university in which I didn’t write at all. But I always came back to it because writing words was an act of communication.

Good question. It was an act of communication with myself. It was a way of seeing, more clearly, things I believed or things that moved me, that I had not fully processed or pragmatically understood.

It was also like an exorcism: I put these words down so that they didn’t envelop and overwhelm the rest of my thoughts.

Q: What is the most difficult thing about your writing process?

A: The answer will depend entirely on when the question is asked, sadly.

If, for instance, I’m starting a new book, the answer will be: beginnings. I start a book several times, trying to find the right tone, the right voice. The longest not right attempt at a beginning was thirty-two pages. Most peter out at between four and six.

At the moment, I’m revising, so the answer is: Revision.

Writing, once I have a beginning, is about flow. The story is like a river; I can follow it. I can swim in it. I can drown in it if I don’t remember to come up for air. But the entirety of the book flows from beginning to end. I don’t write out of order. I don’t write to an outline. Part of writing, or the joy of it, is in the discovery. I have an idea of where things are going and how they’ll get there, but the act of writing the book produces a lot – sometimes a LOT – of surprises.

What I know is the end. I understand the world. I don’t know how the characters will reach the end from the beginning, because even when I do know, I’m often wrong.

So, I now have a finished book. I revise it for submission–but I’m aware that I’m too close to it, and that my editor is going to be reading it and pointing out the parts that didn’t work for her.

Here’s the trick to editing: editors read as readers. Their editorial experience gives them the abililty to explain why they had the reader reaction they did. I’m not going to argue about the editor’s reaction to the book. Even if I disagree with it, what am I going to say? No you didn’t react that way? Clearly, they did.

What I can do is examine why the scene didn’t work for the editor. Why it wasn’t compelling enough or believeable enough. If I want to keep that scene in this book, I have work to do.

And I can get caught up between the two states, until I can’t tell what’s objective and what’s subjective.

The corollary to that is that the book is a metaphoric river, and it is very difficult to restructure a river. I can’t just cut out one part and move it to another part if the terrain and the riverbed are not substantially the same for the two parts.

Which means I frequently end up having to take a chapter which mostly works and throw the entire thing out and start it again because I can see the seams in the revision if I don’t.

Q: Finally, what do you want readers to leave with after finishing your books?

A: I write books because reading books moved me. A lot. I could get lost in a book, sink into it, follow it, think about it, daydream about it.

Writing story is, in some ways, building a vessel that is solid enough to carry the emotional weight of the ending. 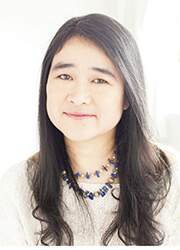 Michelle Sagara is an author, book¬seller, and lover of liter¬ature based in Toronto. She writes fantasy novels and lives with her husband and her two children, and to her regret has no dogs. Reading is one of her life-long passions, and she is some¬times paid for her opinions about what she’s read by the venerable Magazine of Fantasy and Science Fiction. No matter how many book¬shelves she buys, there is Never Enough Shelf space. Ever.