The Secret of Suspense – Guest Post by Author Chris Karlsen 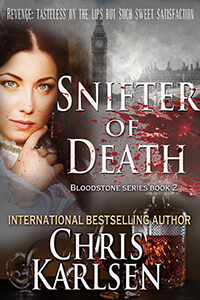 The summer of 1889 was proving to be a strange one for Detective Inspector Rudyard Bloodstone and his partner.

They had a sexual pervert loose. The man didn’t actually harm women but threatened them at knife point, fondling them, and ultimately stealing their stockings.

Far more serious were the murders of influential men, which appeared random other than they were all killed by arsenic poison. Never had he and his partner had cases with so little workable evidence.

Also, the rivalry between him and his detective nemesis at London’s other police department was intensifying. That nemesis was the boxing champion of their department and looking to challenge Rudyard, who never trained as a boxer.

Besides Rudyard’s pride being at stake, and the pride of his station, his nemesis also had in his possession a photograph of the woman Rudyard cares very much for. The new lady in Rudyard’s life had captured his heart and he’d fight the devil himself to save her reputation.

The Secret of Suspense by Chris Karlsen

I am speaking for myself in this article. But I believe with many of the genres we love, we enjoy them because the hero or heroine elicit either sympathy or empathy. For example, in Cornwell’s historicals, we empathize with the men on the battlefield. He paints the brutality of war with such expertise we can almost smell the blood. Julie Anne Long makes us want to give her Regency heroine a sympathetic hug. We see her standing by the garden door watching the handsome hero she believes is unattainable. Or in a good sci-fi like The Martian, we empathize with the panic the astronaut suffers when he wakes up and finds he’s been abandoned on Mars.

Suspense offers the reader a wider choice of reactions to the character’s dilemma(s). We can remain observers. As such a good suspense is brilliant at keeping a tight hold on our attention and emotions. Three outstanding examples to me are: The Sixth Sense, Rebecca, and Wait until Dark.

In The Sixth Sense, the answer to the suspense is given from the very beginning but most of us simply didn’t recognize it for what it was. We see Bruce Willis get shot. The wound looks lethal. A short time later we see him called in to interview Hayley Joe Osment (Cole Sear), a young boy who claims, “I see dead people.” Most everyone I knew, myself included, watched, wondering why the boy saw dead people, what was Willis going to do. We watched never realizing until the end that Bruce Willis was dead. Yet, we were told.

In the story Rebecca, Du Maurier gave us a heroine who remained nameless through the story. One who suffered under the menacing attitude of the housekeeper, Mrs. Danvers. Du Maurier created such an oppressive atmosphere there were times I, as a reader, had to put the book down. I had to break from the darkness. I didn’t identify with the heroine but I felt for her. The suspense built into that darkness generated worry for the poor heroine.

Returning to suspenseful movies, Wait until Dark had all of us I think on the edge of our seats. When Alan Arkin stalked blind Audrey Hepburn in her apartment, I held my breath. And I swear everyone in the theatre, men and women, jumped a foot out of their seats when we thought he was dead, but he wasn’t, and out of the dark, he grabbed her ankle.

For readers who want more than being interested observers, suspense satisfies that desire. It is the genre that allows the reader to be either the detective or the victim. Suspense can also be a story that walks a fine line where you, as reader, aren’t sure if the protagonist is the killer or the victim. The perfect example of that is Gone Girl. Gillian Flynn did a remarkable job with Nick Dunne. The question of did he or didn’t he kill his wife hung in the air for most of the story.

If a reader always wants to opt for being the detective, Christie’s Hercule Poirot is a safe choice and she gives the reader interesting settings for crime scenes.

In my Bloodstone series, I like giving the reader two POV’s, the killer’s and Detective Inspector Rudyard Bloodstone, my protagonist. I don’t write slasher type killers. I like to write more complicated antagonists. I prefer to get into their heads and let the reader see why the killer feels no remorse for what they’ve done. In their twisted way of thinking, they feel justified. The fact that they aren’t doesn’t come into play for them.

Rudyard or Ruddy as I like to refer to him is my favorite character to write. As a retired detective, I guess in many ways he is my alter ego. I love putting him in Victorian London. I believe that setting is perfect for murders. There’s such a diversity of social classes. I enjoy creating the variations in the classes and the environment.

Ruddy is a war hero who doesn’t consider himself a hero. I love that about him. He’s from a working class Welsh family. He has a sometimes healthy and sometimes problematic disregard for influential political forces and administrators. He has a sharp tongue and a short fuse. I especially love filling his world with a wide variety of characters. Some are friends, some associates from work, some enemies, and some just folks who cross his path. It is great fun to flush out his personality by showing how he reacts to the various people and events in his life.

One of the things I like best about Ruddy is that he’s not Sherlock Holmes. I’ve heard the comparison made several times due to the timeframe of the books and the setting. The first book, Silk, was set in 1888, (no, it is not a Jack the Ripper story.) The latest book, Snifter of Death, is set in 1889. Ruddy is not perfect like Sherlock. He makes some mistakes in his investigations. He occasionally follows the wrong leads. He doesn’t have the incredible Dr. Watson to work with but the very reliable and affable, Archie Holbrook. Archie is the perfect foil for Ruddy. He is cool-headed and does a good job of keeping Ruddy’s temper in check when fools are looking to start up with Rudyard.

I think the ultimate secret of suspense is satisfaction of finding out who did it! It’s about a story that keeps you going and going, wondering and wondering, guessing and guessing, then finally, you find out if you were right. It was Miss Scarlet in the library with the candlestick! We only have to look to Clue, one of the most enduring board games to see how charmed we are by suspense. 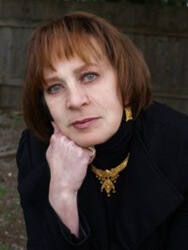 I was born and raised in Chicago. My father was a history professor and my mother was, and is, a voracious reader. I grew up with a love of history and books.

My parents also love traveling, a passion they passed onto me. I wanted to see the places I read about, see the land and monuments from the time periods that fascinated me. I’ve had the good fortune to travel extensively throughout Europe, the Near East, and North Africa.

I am a retired police detective. I spent twenty-five years in law enforcement with two different agencies. My desire to write came in my early teens. After I retired, I decided to pursue that dream. I write three different series. My paranormal romance series is called, Knights in Time. My romantic thriller series is Dangerous Waters. The newest is The Bloodstone Series. Each series has a different setting and some cross time periods, which I find fun to write.

I currently live in the Pacific Northwest with my husband and five wild and crazy rescue dogs.

Stop by these great hosts for guest posts, interviews, reviews, and giveaways!

This is a rafflecopter giveaway hosted by Partners in Crime Virtual Book Tours for Chris Karlsen. There will be 1 winner of one (1) Amazon.com Gift Card. The giveaway begins on November 1 and runs through December 4, 2017.

I want to thank Aurora’s Bs. Book blog for the opportunity to share my thoughts on suspense and to showcase Snifter of Death. I look forward to connecting with her followers.
Chris Karlsen

My pleasure! Thanks so much for the fantastic Guest Post.

Great post. I will admit, since mystery/suspense is my go to genre, I do try and play detective. And most times, authors leave me with “I didn’t see that one coming”.

I try to play detective too! unfortunately I suck at it so I’m always on the edge of my seat! LOL

Great post. “I think the ultimate secret of suspense is satisfaction of finding out who did it! It’s about a story that keeps you going and going, wondering and wondering, guessing and guessing, then finally, you find out if you were right.” This is so true and I wish more authors would remember that. It seems like many authors do not trust the reader to figure it out on her own.

I completely agree Terri! I may not be the best detective but I don’t like being “fed” a suspense story either:)

Hi Chris, I’m catching up on what I missed earlier in your tour. I enjoyed reading this post today.

“But I didn’t know him. And I didn’t trust him. The man I had fallen for hid something. I could feel it, slipping into bed with us at night, slithering up my bare legs, looking for a vulnerable place to bite”