Sneak Peek from After Shell Fell by Amber Laura 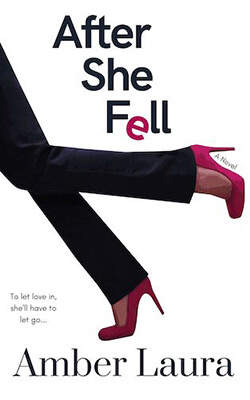 She’s tried for years to convince herself that she isn’t in love with him. If it hasn’t worked, at least she’s managed to convince him of it, anyway.
A tragic love affair from her past had shattered Christina’s illusions of romance—it’d shattered her entire world, left her utterly broken and blamed. She’s fallen once before. She isn’t about to make the same mistake twice!
Jason Gordman is off-limits. Charming, playful, confident—he’s everything dangerous to her defenses. Worse yet, he’s the boss’s son. Hiding behind antagonism and indifference, Christina manages to keep him at a careful distance. That is, until one fateful night when she finds herself snowbound with him in a blizzard and she slips, allows herself one, forbidden kiss…
Struggling to reconcile her feelings, Christina is entirely unprepared for where that one stolen moment will lead her.

A stark, angry silence swarmed around them in the wake of that soft charge. Gaping at Jason, Christina couldn’t find the words to speak.

“You think I was trying to manipulate you in some way?” He clicked his tongue against the back of his teeth. “Or that I was bored and figured you’d be an easy target?”

She felt her face twitch at the words, at their meanness.

He whistled, his face creasing with disappointment at her damning silence. “I see.” With a breath of air, he ran a hand through his hair again, only this time his fingers were weary with fatigue. “Wow. I thought you knew me better than that. I thought even you liked me more than that assessment would imply.”

“I threw myself at you. Shamelessly,” she muttered, her cheeks betraying her discomfort.

Jason nodded again knowingly. “Me…and someone from your past, right? And they threw that back in your face, didn’t they?”

She didn’t answer him.

“I’m surprised at you,” Jason confessed.

“At me?” She notched her chin up defensively.

“A cool, confident woman such as you are—”

“A defense mechanism, surely,” she returned.

Jason laughed at her ready response.

“On Easter, you said you’d always thought I hated you,” Christina reminded him. Those words, and the kiss they’d shared, slithered across her mind with near perfect detail.

“I wanted you to think I hated you.”

She reared her head back. “I didn’t say that.”

“But that’s why,” Jason confirmed, taking another, almost victorious step toward her. In response, Christina stumbled back in withdrawal, keeping the space carefully between them. “Because you think your only attraction is being, what was that word you used the other night?” Jason asked, but it was obvious he wasn’t actually expecting an answer. “Convenient?”

Christina’s shoulders drew back, her ears burning against the ugly accusation. “Stop it.” She held up a hand. “Just. I’ve had enough. You don’t know me so don’t you dare stand—”

“And whose fault is that?” he taunted her and, perhaps in spite of that raised hand warning him off, took an additional step in her direction.

“You want to know why I kissed you?” Jason asked, his question bringing him steadily nearer.

It was at that moment that Christina felt the whiteboard meet up against her back. In reaction, her hands pressed against the melamine surface behind her, the glass tray holding the markers biting against her lower back. Still, he didn’t stop walking, not until—

“What?” she managed weakly.

“You weren’t the only one, you know,” he whispered, his steps catching up to her at last. Leaning slightly forward, his body was close enough to promise contact without actually touching. His hands, however, he kept down at his sides, safely out of reach. “You weren’t the only one that first afternoon on my parents’ doorstep”—his lips twitched humorously—“those documents of Dad’s clutched in your arms.”

“What?” she whispered again, her body humming so loudly she could hardly take in his words.

“I thought you might have been the most gorgeous woman I’d ever seen,” he told her, his head dipping lower. “I still do.”

Her intake of breath was a rush of sound as his lips hung, slanted just above hers, so tantalizingly close. “And since we’re being honest, let me confess one other thing. I want to kiss you again.”

She made a whimpering sound low in her throat, her body stilling, imploring.

Her gaze colliding with his, Christina’s eyes widened. “Wha—?”

“Not yet,” he continued, his nose brushing down to tickle against her own, the action softening the words.

Disappointment and frustration waged equally inside Christina. But when she would have broken free of his proximity, Jason only pressed closer, anticipating the move.

“When I do finally kiss you,” he assured her, one finger coming up to trace the edges of her mouth, “I promise you that you’ll think about it later, relive it when you’re alone.”

Against her will, Christina moaned at the contact, the words, the mesmerizing tease.

“Only that time, you won’t be wondering about the motives.”

Disoriented, Christina felt the unwelcome rush of air as Jason slowly pulled away from her body, giving her space at last. Her eyes clouded, her head slowly shaking with confusion. “I don’t…”

“I won’t make the same mistakes that he did.”

“He?”
“The man from your past. The one you sometimes mistake for me.” 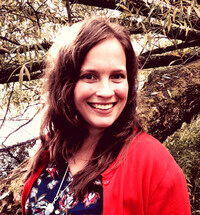 Five Fun Facts about the Author”

1. As a writer, Amber Laura does her best daydreaming as a window-gazing passenger on long car rides.
2. If there’s creamer, she’s drinking coffee. When she edits, there’s always creamer.
3. A blogger, she also writes web fiction—(free stories updated chapter-by-chapter, week-by-week). Check it out at www.litliber.com.
4. Psst! Her debut novel, Topaz and Lace, a contemporary romance set in a fictitious Texas town, got its start on that same blog.
5. While she may physically reside in the beautiful country of Northern Minnesota, in her imagination, Amber Laura lives all over the world. She considers it one of the best perks to being a writer: easy, cheap travel. That and the oddball characters she meets along the way…

He put his big hand on my neck and stroked my chin with his thumb. “ I don’t care what we call it, but you’re my girl, and I’m your guy. If you wanna call me your boyfriend, I’m okay with that. Think I’d even like it.”