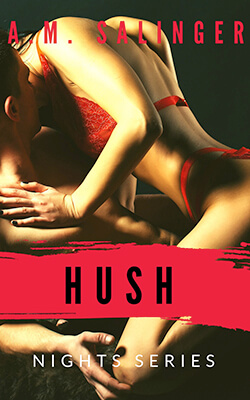 Tom Sutherland is an arrogant prick. There, I said it. Okay, so he’s also my assistant and I couldn’t survive without him, but that doesn’t make him less of an irritating bastard — Lana

Lana Keele is a witch. A beautiful, frustrating witch placed on this earth to torment me. Yeah, she’s my boss, but she’s still the most maddening creature I’ve ever had the misfortune to cross paths with — Tom

When Lana Keele, president of Keele Industries and only surviving heir to business tycoon Oliver Keele, wakes up in her devil-of-an-assistant’s bed after a drunken night out, she fears the worst. That is, until prissy Mr. Perfect Tom Sutherland declares that she’s the last woman he’d ever want to sleep with.

After surviving four years in the company of the infuriating woman he’d lusted after since his teens, Tom has had just about enough of the unholy siren that is Lana, especially when she turns up inebriated on his doorstep one night and demands sex. Convinced that Lana will never return his affections, Tom decides that it’s high time to get over his unrequited love.

Except Lana doesn’t quite seem to agree with this plan. Not after she sees him with another woman. Not after she confronts him about it. And most definitely not after he succumbs to temptation and kisses her.

As they finally ignite the fire that has burned so long between them, Tom cannot help but be certain that for Lana, this is just about sex. Will he be satisfied with only having the body of the woman he loves and not possess her heart? Or will Lana convince Tom that she truly means to give him her everything?

Discover Lana and Tom’s story in this sexy and stormy addition to the hot, contemporary romance series Nights by A.M. Salinger. Note from the author: although each book inNights can be read as a standalone, you will enjoy this series even more if you read the books in order!

This is a novella length MF romance with a HEA.

Lana Keele stirred and slowly blinked her eyes open. Searing light filled her vision. She winced and twisted her head, a mumbled curse tumbling past her lips. A wave of dizziness swept over her; her stomach clenched painfully. Lana froze and swallowed the rush of bile shooting up her throat. Hot daggers stabbed at her temples. She moaned softly.

It was a moment before she realized she was lying on her front on a bed. She stared blearily at the crisp white pillow in her line of sight before rolling over carefully onto her side. She studied the room she was in with widening eyes.

Where the hell am I?

Lana gasped and sat up. A shaky groan rumbled out of her chest when the headache became a vise squeezing her skull. She reached for the sheet wrapped around her waist and legs and clutched it to her breasts.

She was only wearing her bra and panties.

What the hell happened last night?!

All Lana remembered was being in Shanghai’s latest happening club and having drinks with the man she’d picked up at a bar while she’d been out with a girlfriend she hadn’t seen since her college days. She dimly recalled drunkenly kissing the guy while her similarly inebriated friend hooked up with another man. The rest was a blur.

A door opened opposite the end of the bed. A man walked out of an en suite bathroom, his face obscured by the towel he was using to rub his hair dry.

Lana’s pulse jumped. She stared up a pair of powerful, tanned legs, the mouth-watering deep V tantalizingly revealed at the top of the towel perched precariously on slim hips, a defined six-pack, a broad, muscular chest, and strong corded arms that bunched and flexed with the man’s movements.

Holy crap, was the guy from the club this hot?!

The man paused and lowered the towel from his head. Lana felt the blood drain from her face.

Tom Sutherland, her assistant and secretary of four years and the bane of her life, arched an eyebrow at her.

“Oh, you’re up,” he said in a matter-of-fact voice. “You’d better get dressed. You have an appointment in fifty minutes.”

Lana’s jaw sagged open as Tom walked over to a wardrobe and took down the neatly pressed suit, shirt, and tie draped on a clothes hanger hooked on the handle. Her eyes widened into saucers when she saw one of her work suits on an adjacent hanger, complete with a pair of matching panties and bra. Tom removed briefs from a chest of drawers and disappeared inside the bathroom.

Lana was still staring at the spot where he’d disappeared when he came out minutes later fully dressed. He sighed and glanced at his watch with a frown while he finished knotting his tie.

“Forty-five minutes, Lana,” he said briskly. “Get your ass into gear.”

Lana opened and closed her mouth soundlessly as he headed for the bedroom door.

Tom stopped and twisted on his heels, his hands in his pockets. Lana ignored the wild pounding of her heart as she watched the way the motion stretched the material of his shirt across his torso.

All it took was one look at his condescending expression for her to stiffen, the familiar irritation that plagued her whenever she was in his presence replacing the baffling feeling presently coursing through her.

There’s no way in hell I just thought Tom Sutherland was attractive!

“Funny story,” Tom said sardonically. “My boss turned up on my doorstep at one in the morning, barged inside my apartment, stripped, and demanded sex.” He cocked an eyebrow. “I felt I had to oblige her.”

Panic slammed into Lana and sent her pulse into the stratosphere.

No. Dear God, please tell me we didn’t—

Anger flashed through her when she detected the mocking light in Tom’s eyes. “You asshole!” she hissed. “Tell me what really happened!”

Tom leaned against the doorjamb and crossed his ankles. Lana’s gaze dropped to where his pants stretched across his strong thighs. She cursed internally and brought her eyes back up to his face, angry at herself for noticing his body once more.

This is Tom, for fuck’s sake!

“The part about you turning up at an ungodly hour and entering my place without my permission is accurate, as was your demand for sex,” Tom said coolly. “You then spent the next two hours throwing up in my bathroom. I sent your dress to the dry cleaners, put you to bed, and went to your penthouse to pick up a fresh change of clothes.”

Lana glanced at the pillow next to the one she’d been lying on, her unspoken question hanging in the air.

Tom sighed. “I slept on the couch. Trust me, I wouldn’t fuck you if you were the last woman on Earth.”

Lana inhaled sharply as he turned and left the room. She scowled in the next instant.

“Oh yeah?! And I wouldn’t sleep with you if you were the only asshole left alive on this entire planet!” she shouted after him, a familiar pain surging inside her chest. 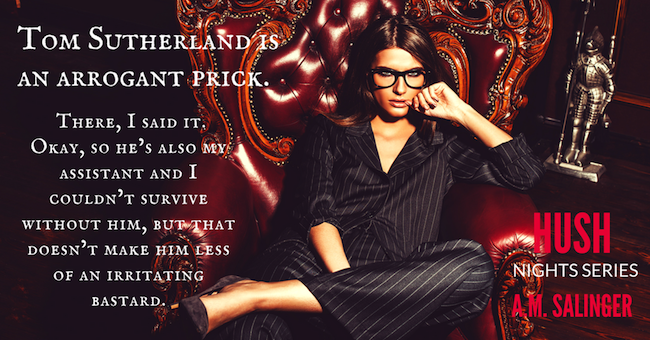 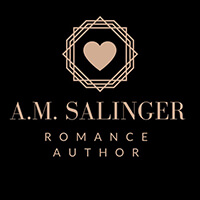 Ava Marie Salinger is the pen name of an Amazon bestselling author who has always wanted to write scorching hot contemporary and erotic romance. In 2018, she finally decided to venture to the steamy side. NIGHTS is the first of several sizzling series featuring sweet, sexy men and women with dark pasts and a whole lot of love to give to the ones brave enough to fight for their hearts. When she’s not dreaming up hotties to write about, you’ll find Ava creating kickass music playlists to write to, spying on the wildlife in her garden, drooling over gadgets, and eating Chinese.

Want to be the first to know about Ava’s new releases and get access to exclusive content, sneak previews, sales, and giveaways ? Then sign up to her Reader Group here and join her VIP Facebook Fan Group here.

“I’ve got you, kitten. You say the word, whatever you need, wherever you need to go, and I’ll do my damnedest to make it happen.”