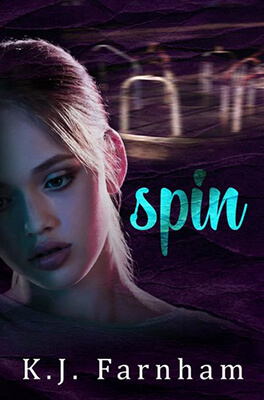 Sixteen-year-old Jenna Kemp is a typical high school girl, complete with a loyal group of friends and a seemingly understanding boyfriend. But when the demons from Jenna’s childhood resurface, she’s suddenly spinning out of control–drinking, partying–anything to numb the pain of the past. After distancing herself from her friends and befriending an outcast, her friends and family start questioning and judging her choices.

But when Jenna doesn’t come home one night, her friends and family realize it’s more than just adolescent rebellion. Jenna’s mysterious disappearance proves that there’s more on the line than they realized. As they sift through a series of her personal diaries, the truth becomes terrifying. Will Jenna’s final diary entry reveal the greatest mystery of all–her whereabouts?

The doorbell rings when I step out into the hallway. Not interested in telling another Boy Scout selling wreaths or popcorn to get lost, I ignore it and retrieve the money from my mom’s dresser. Then I shove the twenty in my pocket and head toward the bathroom, but the doorbell rings again, so I change course and run downstairs, realizing it might be Jenna. I peek through the living room blinds and see two people I never expected standing on my porch.

What the hell? Why are Keeley Simon and Delaney Burns here?

I move to the door and place my hand on the deadbolt, contemplating whether or not to talk to them. A definitive don’t answer echoes through my brain, but then my phone pings with a response from Sticks asking what I need, and I hear Keeley. Shh. Did you hear that? As if she isn’t perfect enough, she also has supersonic hearing.

Whatever. Might as well see what they want. Who knows? Maybe after the epiphany Jenna had last night, she told them everything, and they’re just here to thank me for being there for her when they weren’t. Or maybe instead of thanking me, they’re here to tell me to stay away from Jenna now that she’s decided to come clean about all the shit she’s been through. I wouldn’t be surprised. I’ll never be a candidate for best influence.

I unlock and open the door, then wait a few seconds for one of them to say something. But these Ugg-wearing princesses just stare at me, Keeley with her arms folded across her chest like she’s a prosecutor on some court drama and Delaney shifting from one foot to the other.

“Hey, Leighton,” Keeley says, unfolding her arms. She clears her throat. “We need to talk to Jenna. Is she here?”

So, they haven’t heard from Jenna?

“Nope. But I assume you already know that since Mrs. Kemp probably called you guys, too?” Acting like I don’t care has become my specialty, but at this moment, I’m actually worried. When her mom called earlier, I assumed Jenna might have slipped out for a run without saying anything or that she was with one of these girls or that asshole Dustin. But now I’m beginning to wonder where she is and if she’s okay.

“Look,” Delaney says, marching up onto the porch next to Keeley, “we all know she’s been hanging out with you every weekend lately. If you were a real friend, you’d admit she’s inside sleeping off a hangover.” She narrows her mascaraed eyes at me.

I narrow my eyes right back at her, irritated that even on a Saturday she makes herself look like a cover model and seething at the irony of her last statement. At least I know a friend’s ex is off limits. I’m about to fire back at her, but then I remember the point of their visit and go back to looking like I don’t give a fuck. “Like I told her mom, she’s not here. I haven’t seen her since last night.”

I close the door a little, eager to get back to Sticks to tell him I need a ride to the grocery store and possibly someplace else now. But the way Keeley and Delaney look at each other and then back at me, their expressions matching how I feel on the inside, causes me to pull the door wide open. “Come in and look for yourselves if you don’t believe me.”

“Are you coming in or waiting out there? I don’t care either way.”

She hustles past me without a word. I close the door and turn to find her standing hip to hip with Keeley in the middle of my living room. Hip to thigh, rather, since Keeley is about a foot taller than Delaney. “See?” I say, raising my hands. “She’s not here.”

They both scan every visible area, which includes an adjoining dining room, part of the kitchen, and a hallway that leads to the garage. These girls live in the privileged kind of neighborhood I used to live in with both of my parents, so I’m sure they probably think our townhouse is nothing special, but I don’t give a flying fuck. I’d rather live in a cardboard box in a ditch than in a five-thousand-square-foot house in a neighborhood where everyone has perfectly manicured lawns if it means I don’t have to sleep under the same roof as my dad. In the meantime, I take a seat on the furthest corner of the sectional from where they’re standing. The soft black leather makes a crinkling sound as I slide back onto the deep cushion, my eyes trained on them and their contradicting features—Keeley with her dark brown everything and Delaney with her blonde hair, blue eyes, and flawless porcelain skin. If Jenna stood between them, with her chestnut brown hair and olive complexion, the trio would look like they belong in an ad promoting interracial friendships.

Keeley sighs, begins pacing the room and says, “So, if Jenna isn’t here, then where is she?” She stops and looks from me to Delaney then back to me. “You said you haven’t seen her since last night. Where were you guys?”

“Where was she going when she left?”

“Look, I don’t feel right telling you two Jenna’s business. If she wanted you to know where she was going she would have told you herself.”

“Excuse me?” Delaney takes three quick steps in my direction, causing Keeley to grab her pint-sized friend’s shoulder, likely preventing her from doing something she’ll regret. I’m shocked as hell by this sudden outburst, but there’s no way I’ll show it. Instead, I pick at the frayed hole in the left knee of my jeans and wait for the right moment to tell these bitches to leave.

“We’ve been friends with Jenna since grade school! You? You show up THIS YEAR with your stupid hair, weird gauges, and depressing wardrobe. And, of course, Jenna befriends you because that’s her—always wanting to be nice, always wanting to help—or at least that was her.” She sniffles, causing me to impulsively glance up at her. A single tear trails down each of her cheeks as she continues her tirade. “And then, BAM, all of a sudden she starts acting like a completely different person. And I blame you, Leighton!”

Me? She blames me? Any bit of sympathy I may have been feeling for her has just gone out the window. “Fuck you. You’re clueless. And I’d like both of you to get the fu—”

“Leighton. Wait . . .” Keeley pleads, her hand falling from Delaney’s shoulder when Delaney collapses onto the couch and plants her face in her hands. “Can you just tell us where she went? Or even who she was with?”

I should. I really should. Because the more I think about where Jenna went last night, the more sick to my stomach I feel. But there are still explanations for where she could be now, so I can’t. “Sorry,” I say, shaking my head and pulling a lighter and one-hitter out of my hoodie pocket. “She can tell you herself.” I maintain eye contact with Keeley as I bring the pipe to my lips, light up, and inhale deeply.

Delaney gasps, interrupting Keeley. “You’ve got to be kidding me! You have no idea where your supposed friend is, and you’re smoking weed?” she shouts.

I chuckle to myself as I recall Jenna telling me Delaney was the one who wanted the three of them to try smoking pot together for the first time. She’s even the one who bought the weed from Lou. But now that I’m doing it, apparently, it’s a mortal sin.

“Let’s just go,” Keeley says, shaking her head and motioning for Delaney to follow her to the door.

As soon as both girls are out on the porch, Keeley turns, still holding the screen door open as if she means to say something. But I’m done, so I close the inner door before she has a chance. 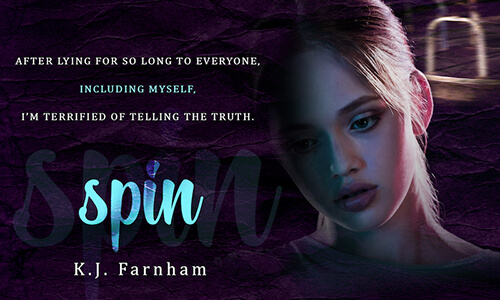 K. J. Farnham writes contemporary fiction for women and young adults. A former educator who grew up in the Milwaukee area, she now resides in western Wisconsin with her husband and three children. To learn more, visit her website

“It seemed that people had a habit of underestimating my blunt, crazy, homicidal ray of sunshine”