Sneak Peek from Stranded At Night by Rebekah Dodson 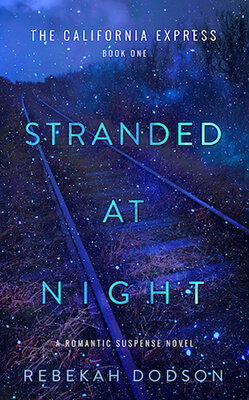 Two days after Christmas, two in the afternoon, two passengers must face the storm to prevail against the darkness.

Maggie Espinoza needs to get away from Portland, Oregon, from a blown out past and a bleak future. She figures taking the Express train to balmy Southern California to start over is just what she needs. Two days after Christmas while everyone is preparing for the New Year, she makes her escape during the worst blizzard the state has ever seen.

Jesse Cabot senses a darkness in fellow passenger Maggie when he sits next to her on the train.

Why is she so haunted and broken?

When the train suddenly stops in the middle of the blizzard weird things start to happen.

Random disappearances, an assault, a body in the snow.

It becomes clear it’s up to Jesse and Maggie to find the culprit or face the music on the stranded California Express.

Jesse hoisted himself on top of a stack of suitcases and his legs swung under him. Maggie continually surprised him and had been strong this entire time, but he should have known this was coming. It was in her file, after all.

Why hadn’t he been prepared?

He flipped his phone out and lit up the flashlight, setting it upside down so he could see her better. The baggage car was pitch black otherwise and utterly freezing.

Exhaling heavily, Maggie leaned back against some backpacks and nearly slumped down. She clutched the shoulder strap of a bag until her knuckles turned white. She said nothing, but Jesse knew this would get worse before it got better. He waited.

He watched as Maggie’s panic erupted into rage. Her face purpled again, and she heaved for breath, but this time she was pacing up and down the far end of the car – away from the bodies.

“What did he do?” she asked the nearly empty car. “He was innocent!”

“Perhaps he saw something…” Jesse offered, but clammed up when she glared at him.

“He didn’t deserve it!” she shrieked. “Beth, oh God, his sister. What if she finds him? We have to go back… we have to…” she paused suddenly and fiddled with the pocket of her coat. She finally yanked out her vape pen and sucked heavily, exhaling an acrid plume of marijuana.

Jesse coughed and waved the vapor away from him.

“Feel better?” he asked her, mostly sarcastically. “And is now really the time to be getting high?”

She glared at him with a venomous look of ‘shut up.’ He could take a hint.

A few more puffs and she stilled, finally sinking to the floor and pulling her knees to her chest.

Jesse leapt down from his perch and finally rushed over to her, pulling her into his arms. He wasn’t sure if he should, but he didn’t know what else to do. He’d seen more than a few dead bodies in his time, but he wasn’t ready to divulge that to Maggie.

He should have known it would trigger her – most people wouldn’t be okay with seeing a freshly dead body, and why would she be any different?

He also suspected he knew what was in that syringe, but the question really was, did she?

“Nick… Jay… Maurice… Damon…” the way she murmured the names of the dead pierced his heart.

He gulped hard, trying to hold her, knowing it wouldn’t, or rather shouldn’t, make a difference. He felt like an asshole because as she shook under his grasp, all he wanted to do was kiss her.

Distracting him, she clung to him and trembled through her panic attack, and he wondered again who had damaged her so much that she would react like this. While there were other people on the train were mostly blissfully unaware of all the carnage, Maggie seemed to be taking it worse than the others, and yet another murder – plus losing the engine car – was shaping up to be hell on earth. But something told him it wasn’t just about the body – whether it was his instinctive intuition, or his years of training, he didn’t know. But she was smart, capable, and curious – he needed her to help solve these murders, if they were going to get to the bottom of this and try to get rescued.

“Maggie?” He brushed her hair away from her face. “Are you all right?”

To his surprise, she reached up and braced against his shoulders and pushed him away.

Caught off guard, he stumbled backwards and tripped over a suitcase. Catching himself before it was too late, he stepped over it and landed on his feet.

“Who are you?” She screamed at him, wrapping her arms around her in the freezing cold emptiness of the baggage car.

“Yeah, a builder from Haiti, and a tattoo artist; which is complete and utter bullshit.”

Jesse’s left eye twitched. Had she pegged him already? He’d clearly underestimated her.

She held up her hand. “One, you have a gun. Not a regular one people around these parts carry.”

“Everyone has a gun these days,” he tried to protest.

“Two, you are so formal when you talk – not like an idiot from California.”

“And that’s another thing. Your accent? Totally fake. And this?” She stalked forward and tried to snatch his sunglasses from his face. “What are you hiding behind this…”

He couldn’t have her uncovering at least one of his secrets, maybe the least deadly of them all. But she was in for a surprise if she thought she’d guessed everything. He side stepped her nimbly, and reaching out, snatched her arm and spun her around, pinning her hand behind her back and shoving her against the baggage. She yelped as he did, and his other hand pressed her face against the luggage. He was careful to only apply a gentle amount of pressure, so he didn’t hurt her.

“I’m not just a simple builder, but you’re not an art major, either,” he hissed into her ear.

He expected her to fight, to break free, maybe even take a swing at him – which she’d miss of course. He’d had a few years of training and was faster, smarter, and as a last resort, he had a weapon. She did not.

Instead, she froze, and all he could hear was her breath coming ragged again. Her spine stiffened, and he knew she was going right back into a panic attack.

Jesus Christ, who could have done this to her? he thought, and at her distress he immediately let her go and stepped back.

He expected her to collapse again, but instead, her eyes flashed at him as she turned around.

“I said don’t fucking touch me!” She launched herself at him, and the full force of her body slammed him to the cold, metal ground.

“What are you hiding?” she yelled, shaking his shoulder. “You have a gun … you can shoot… Are you a fucking cop? Who. Are. You?”

He let her straddle him with his arms pinned to his sides – better for now she didn’t know he could kill her in a dozen different ways if he wanted – but he certainly wasn’t expecting her to reach down and rip his sunglasses away and toss them into a corner. The gasp that rolled over her didn’t shock him, in fact, he should have anticipated it. Even his own boss at the agency was uncomfortable looking at him most days. He’d grown so accustomed to wearing his sunglasses everywhere they were like a second skin, now.

Maggie scrambled off him slowly and turned and slid to the ground, grasping the cold, metal floor beneath her. In the light from Jesse’s cellphone, her cold breath expelled in airy puffs. “Your eyes…”

Realizing she was smarter than he thought, just based on the fact she’d let him hold her a few minutes ago but then flipped at a moment’s notice, he waited. He knew well enough when an intelligent criminal was about to confess, and part of him was excited she was so close. It was either that, or she was just plain crazy. But in all his years he hadn’t been wrong about a case.

If only he didn’t want to protect her, to save her. He’d never fallen for a suspect, and he wanted to curse at these feelings she’d awoken in him. He hated himself for how he felt, but he couldn’t deny it.

Did she feel the same way?

He crawled over and sat next to her, pulling one knee to his chest.

“It’s called heterochromia iridium, in case you’re wondering,” he told her gently. “One blue, one brown. It’s hereditary, or so I’m told.” 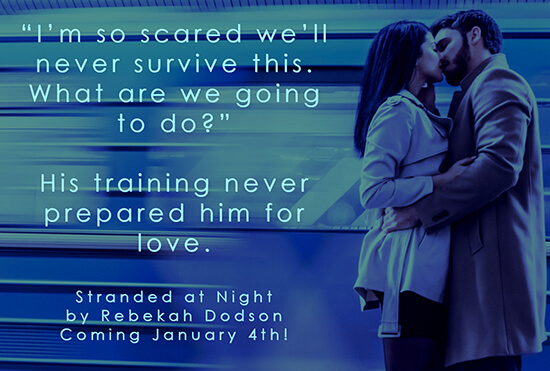 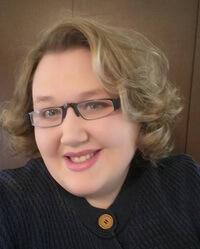 Rebekah Dodson is a prolific author of over 30 romance, fantasy, and science fiction novels. Her works include the series Postcards from Paris, #1 bestselling Curse of Lanval series, Life After Us series, and several stand alone novels and short stories. She has been writing her whole life, with her first published work of historical fiction with 4H Clubs of America at the age of 12, and poetry at the age of 16 with the National Poetry Society. With an extensive academic background including education, history, psychology and English, she currently works as a college professor by day and a writer by night.