Sneak Peek from The Henna Artist by Alka Joshi 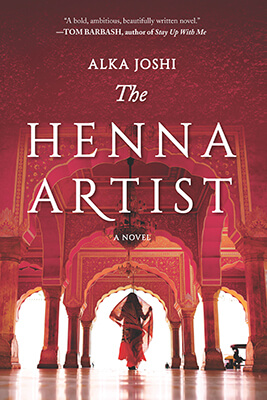 After fleeing an arranged marriage as a fifteen year old to an abusive older man, Lakshmi Shastri steals away alone from her rural village to Jaipur. Here, against odds, she carves out a living for herself as a henna artist, and friend and confidante to wealthy, upper caste women. Surviving by her wits and talents, she shares her knowledge and keeps their secrets in a delicate balancing act amid the changing 1950s social mores brought about by Indian Independence. Vulnerable to opinion and innuedo, at any point her intentions might be misunderstood, and she could fall prey to a damaged reputation or worse. Still Lakshmi manages to save to build a house with the dream of bringing her aging parents here to live with her and redeem herself in their eyes. Then one day her ex-husband arrives in town seeking her out with a girl in tow, a sister she did not know she had. Her sister is both passionate and reckless by nature, and all of a sudden the caution that Lakshmi has carefully cultivated is threatened, along with her livelihood. But she preseveres, and in doing so manages to lift up the others around her with her success.

Lakshmi’s tenacity and spirit see her join the ranks of other brave women of historical fiction, such as Farough Farrokhzad in Jasmin Darznik’s Song of a Captive Bird.With gorgeous prose and urgent themes, the novel will captivate readers of Shobha Rao’s Girls Burn Brighter, and those who seek a narrative both compelling and necessary.

Her feet step lightly on the hard earth, calloused soles insensible to the tiny pebbles and caked mud along the riverbank. On her head she balances a mutki, the same earthenware jug she uses to carry water from the well every day. Today, instead of water, the girl is carrying everything she owns: a second petticoat and blouse, her mother’s wedding sari, The Tales of Krishna her father used to read to her—the pages fabric-soft from years of handling—and the letter that arrived from Jaipur earlier this morning.

When she hears the voices of the village women in the distance, the girl hesitates. The gossip-eaters are chatting, telling stories, laughing, as they wash saris, vests, petticoats and dhotis. But when they spot her, she knows they will stop to stare or spit at the ground, imploring God to protect them from the Bad Luck Girl. She reminds herself of the letter, safe inside the mutki, and thinks: Let them. It will be the last time.

Yesterday, the women were haranguing the Headman: why is the Bad Luck Girl still living in the schoolteacher’s hut when we need it for the new schoolmaster? Afraid to make a sound for fear they would come inside and pull her out by her hair, the girl had remained perfectly still within the four mud walls. There was no one to protect her now. Last week, her mother’s body had been burned along with the bones of other dead animals, the funeral pyre of the poor. Her father, the former schoolteacher, had abandoned them six months ago, and, shortly after, he drowned in a shallow pool of water along the riverbank, so drunk he likely hadn’t felt the sting of death.

Every day for the past week, the girl had lay in wait on the outskirts of the village for the postman, who cycled in sporadically from the neighboring village. This morning, as soon as she spotted him, she darted out from her hiding place, startling him, and asked if there were any letters for her family. He had frowned and bit his cheek, his rheumy eyes considering her through his thick glasses. She could tell he felt sorry for her, but he was also peeved—she was asking for something only the Headman should receive. But she held his gaze without blinking. When he finally handed over the thick onionskin envelope addressed to her parents, he did so hastily, avoiding her eyes and pedaling away as quickly as he could.

Now, standing tall, her shoulders back, she strolls past the women at the riverbank. They glare at her. She can feel her heart flutter wildly in her breast, but she passes, straight as sugar cane, mutki on her head, as if she is going to the farmers well, two miles farther from the village, the only well she is allowed to use.

The gossip-eaters no longer whisper but shout to one another: There goes the Bad Luck Girl! The year she was born, locusts ate the wheat! Her older sister deserted her husband, never to be seen again! Shameless! That same year her mother went blind! And her father turned to drink! Disgraceful! Even the girl’s coloring is suspect. Only Angreji-walli have blue eyes. Does she even belong to us? To this village?

The girl has often wondered about this older sister they talk about. The one whose face she sees only as a shadow in her dreams, whose existence her parents have never acknowledged. The gossip-eaters say she left the village thirteen years ago. Why? Where did she go? How did she escape a place where the gossip-eaters watch your every move? Did she leave in the dead of night when the cows and goats were asleep? They say she stole money, but no one in the village has any money. How did she feed herself? Some say she dressed as a man so she wouldn’t be stopped on the road. Others say she ran off with a circus boy and was living as a nautch girl, dancing in the Pleasure District miles away in Agra.

Three days ago, old man Munchi with the game leg—her only friend in the village—warned her that if she didn’t vacate her hut, the Headman would insist she marry a widowed farmer or demand she leave the village.

“There is nothing here for you now,” Munchiji had said. But how could she leave—a thirteen-year-old orphan girl with no family or money?

Munchiji said, “Have courage, bheti.” He told her where to find her brother-in-law, the husband her older sister had abandoned all those years ago, in a nearby  village. Perhaps he could help her find her sister.

“It would not be proper,” the old man replied gently. He made his living painting images on the skeletons of peepal leaves. To console her, he’d given her a painting. Angry, she’d almost thrown it back at him until she saw that the image was of Lord Krishna, feeding a mango to his consort Radha, her namesake. It was the most beautiful gift she had ever received.

Radha slows as she approaches the village threshing ground. Four yoked bulls walk in circles around a large flat stone, grinding wheat. Prem, who cares for the bulls, is sitting with his back against the hut, asleep. Quietly, she hurries past him to the narrow path that leads to Ganesh-ji’s temple. The shrine has a slender opening and, inside, a statue of Lord Ganesh. Gifts are arranged around the Elephant God’s feet: a young coconut, marigolds, a small pot of ghee, slices of mango. A cone of sandalwood incense releases a languid curl of smoke.

The girl lays Munchiji’s painting of Krishna in front of Ganesh-ji, the Remover of All Obstacles, and begs him to remove the curse of The Bad Luck Girl.

By the time she reaches her brother-in-law’s village ten miles to the West, it is late afternoon and the sun has moved closer to the horizon. She is sweating through her cotton blouse. Her feet and ankles are dusty; her mouth dry.

She is cautious, entering the village. She crouches in shrubs and hides behind trees. She knows an alone girl will not be treated kindly. She searches for a man who looks like the one Munchiji described.

She sees him. There. Squatting under the banyan tree, facing her. Her brother-in-law.

He has thick, oily, coal-black hair. A long, bumpy scar snakes from his bottom lip to his chin. He is not young but neither is he old. His bush-shirt is spotted with curry and his dhoti is stained with dust.

Then she notices the woman squatting in the dirt in front of the man. She is supporting her elbow with one hand, her forearm dangling at an unnatural angle. Her head is completely covered with her pallu, and she is talking to the man in a quiet whisper. Radha watches, wondering if her brother-in-law has taken another wife.

She picks up a small stone and throws it at him. She misses. The second time, she hits him in the thigh, but he merely flicks his hand, as if swatting away an insect. He is listening intently to the woman. Radha throws more pebbles, managing to hit him several times. At last, he lifts his head and looks around him.

Radha steps into the clearing so he can see her.

His eyes widen, as if he is looking at a ghost. He says, “Lakshmi?” 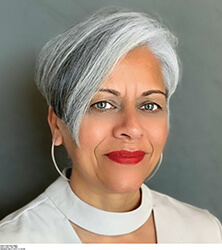 Alka Joshi is a graduate of Stanford University and received her M.F.A. from the California College of the Arts. She has worked as an advertising copywriter, a marketing consultant, and an illustrator. Alka was born in India, in the state of Rajasthan. Her family came to the United States when she was nine, and she now lives on California's Monterey Peninsula with her husband and two misbehaving pups. The Henna Artist is her first novel. Visit her website and blog at thehennaartist.com

I liked how the prologue tied in later to the rest of the story. This was a really good book 🙂