Sneak Peek: I Blackmailed Her Brother by Jessica Frances 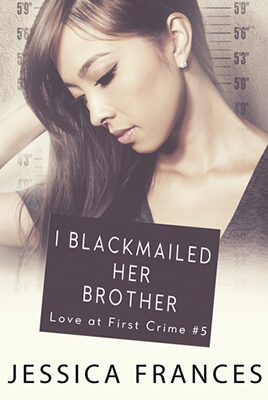 I Blackmailed Her Brother (Love at First Crime #5)

I blackmailed her brother, so she took my heart and held it ransom.

I made a mistake.
I did something unforgivable.
I broke her trust.
I shattered the life we were building together.
And I hate myself for the pain I caused her.
But then someone thought they could threaten her,
Thought they could come after the woman I love.
They need to think again.
I am stronger than I have ever been before.
I am determined to win her back,
And no one is getting in my way.
Not our friends.
Not her family.
And definitely not the crazy maniac who is after her.
I will protect her.
I will salvage what we had,
And I will make us stronger because of it.
Not every relationship can be built on solid ground,
And maybe betrayal and blackmail might not make for a great foundation,
But then again, as some people say: there is nothing quite like love at first … crime.

I reach into my pocket and wave a USB in his face. It’s a physical backup I use whenever I’m on the road and Wi-Fi isn’t viable. One of the first things Gemma taught me was to back up everything. Currently, it just has some random files on it, but Wally doesn’t know that.

He eyes the USB nervously. “What’s on that?”

“It has photos of your arrest, as well as police reports on the drugs you were caught with.”

He blanches and sweat beads over his forehead.

“Look, I don’t want to have to do this. Just give us the keycard to room 704, and we’ll be in and out in less than a few minutes.”

“I’ll get fired,” he whines, his voice piercing louder.

I wince, glancing around us, but no one appears to be paying us much attention. Yet.

“You won’t be. No one will know what’s happening. Gemma and I will look like two lovers going up to our room, and we’ll exit without anyone knowing we were there.”

He shakes his head, but it looks more defeated than opposing. “I can’t fucking believe you. I won’t ever forgive you or her. She is dead to me,” he snaps while stabbing the keyboard in front of him angrily.

My stomach drops, and my lungs compact, making it harder to catch my breath.

“Please don’t be angry at her. She has no idea I’m doing this,” I beg quietly.

Wally does tend to exaggerate in most things. His admission the first time I met him that he would die if the snow didn’t let up soon comes to mind. But Wally also loves to create drama. Often, he orchestrates arguments at family dinners purely for his own amusement.

I can totally see him wanting revenge for this, and what better way than to make Scarlett’s life miserable by taunting her over what I have done.

“I don’t give a fuck if she knows what you’re doing,” he hisses as he slaps the keycard on the counter, his stare cold enough to give me frostbite. “You have fifteen minutes before the room is occupied.”

“Thank you,” I tell him, hoping my pleading tone gains me some sort of sympathy, or at least forgiveness.

He doesn’t glance back up at me again.

I did this all for the right reasons, didn’t I? I had no choice, not without disappointing Zander. I need to prove to everyone that I am up for this. That becoming a private investigator isn’t a mistake.

But, did I take it too far? 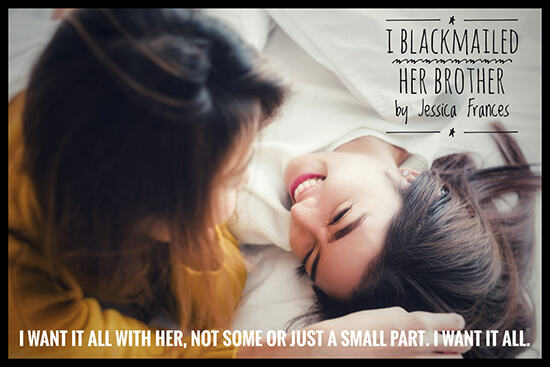 Jessica lives in Adelaide, South Australia. When she is not writing, you can find her reading, napping or watching excessive amounts of TV. Connect with her on Facebook and Goodreads.

Thank you for signing up for the I Blackmailed Her Brother book blitz. I really appreciate your support. <3