Sneak Peek from The Unforgettable Kind by Melanie Munton 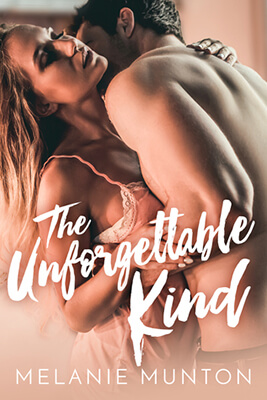 Synopsis:
A best friends to enemies to lovers romance.

As the first female lead sportscaster with FNN (Football News Network), I’ve had to be tough and unflappable for years. No matter how far we women have come, football is still a man’s world. Which is why I’ve strutted my stilettos and lipstick on every field and around every TV studio I’ve ever worked, making sure everyone knows just how much of a woman I am. I let no man get under my skin.

We have a history, Kade and I. It goes all the way back to high school and spans our college years. We used to be best friends, but we haven’t spoken in years. Not since he left without a word, and I made it clear that I never wanted to speak to him again. Now all of a sudden he’s FNN’s newest analyst?

He thinks I’ll break. With every wink he flashes me off-camera and every grope he sneaks under the table, he assumes I’ll shed my badass shell and fall into his arms like old times.

Well screw him, his charismatic smile, and his giant di—er—ego.

I am where I am today because I’ve never let any man stand in my way.

If Kade even tries, I’ll bring him to his knees.

Fate can be a real bitch.

One minute you think you’re going to get the girl, and the next minute she’s slipping away.

It’s a complicated thing, to be in love with your best friend. That friend zone is a tricky place to be, not that I ever entered into it willingly. At least, not with Sam. Fate just seemed to place me there, despite the fight I put up.

Well, fate can go screw herself.

Sam Lawrence was always meant to be mine.

And it’s finally time that I prove it to her.

Everyone knows you don’t fuck with the Brooklyn Brothers.

They may not be criminals, but they protect their own and they get shit done. Period. You don’t always want to know how they get it done because it might be a little shady. But thanks to their father, Enzo, they all have a moral code. Which is why I consider Cris not only a good friend, but also someone I can trust.

Which at the moment, is probably the most important aspect of our friendship.

“Having a bit of a situation down here and was wondering if you could help me out.”

“If I had a nickel for every time I heard that line,” he muses.

“It actually might involve your best friends in Hell’s Kitchen.”

His voice has lost all humor when he demands, “Tell me.”

Considering the implications of the situation, revealing everything to him makes sweat gather on my brow. But he’s one of the few people I know who will keep his mouth shut and who can actually help.

So, I tell him all of it…without dropping Sam’s name.

I might trust the guy, but that doesn’t mean I want her name linked to any of this.

“I’ve heard rumors of the Espositos paying off refs for years,” he says. “Never knew how much of that was bullshit. I’ve definitely heard Fernadino’s name in certain circles, though. His distant cousin is married to Raphael’s niece, I think.”

Sam’s been right about everything so far.

“We’re talking about a multi-million dollar operation here if this cheating ring turns out to be what it sounds like. What is Esposito going to do if his name gets linked to Fernadino and the other refs?”

Cris grunts. “Nothing if there’s no hard evidence to prove it. He’s not going to waste his time by getting involved if the authorities don’t have anything concrete. Plus, getting involved is usually a sign that there’s something to hide.”

My stomach twists with nausea. “And if there is hard evidence?”

“He’ll try to bury it, along with anyone who might talk,” he answers automatically, confidently. “Raphael will do whatever necessary to avoid having charges brought against him, let alone prosecution. And if by chance a case does go to trial, he’ll pay out the ass for a team of high-priced lawyers to keep him out of prison.”

“In your personal opinion, is this something he could be brought down for?” Is it even worth pursuing?

“Yeah, I think it’s possible. Whoever thought Capone would go down for tax evasion? This kind of thing gets a lot of attention. The more high-profile it is, the more pressure on the authorities to do their damn jobs. Not to mention a judge. The hardest part will be to get those refs to talk, though. They know what’s at stake if they cross Esposito. God knows what he would threaten them with. And it’ll be hard for prosecutors to convict without any first-hand testimony.”

“You think there’s anything you can do to help with that?” I hate to ask it of him. But I’m getting a seriously bad feeling about what this might mean if Sam doesn’t let it go, and I’ll do anything to protect her. “Maybe use your wallet to nudge Fernadino and the others in the right direction? We already know they’re easily persuaded by money.”

“Threat of death is also a good motivator,” he retorts. “That’s usually a little more powerful than money, and Esposito knows it.”

“Come on, man. You and your family have wanted to nail the Espositos for years. Now’s your chance. Especially if enough of the right people get involved.”

Goddammit. “What the hell makes you say that?”

“Because you could care less otherwise. You’re only involved because someone you care about already is. I know you well enough to recognize when you’re protecting someone, Jennings. You going to tell me who she is?”

I like the man. I respect him. I trust him. But…

“Not a chance. Nothing personal.”

He chuckles. “I understand. Can’t say I’ve ever experienced that kind of devotion outside of my own family. But I get it.”

I’m not sure if I should feel relieved at having his assistance and the weight it carries, or dread that we’re traveling further down the rabbit hole. 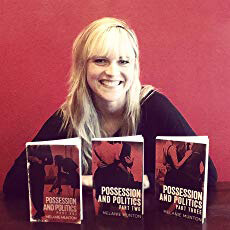 Traveler. Reader. Beach-goer. St. Louis Cardinals fan. Pasta-obsessed. North Carolina resident. Sarcastic. Bit of a nerd.
Author of the Cruz Brothers, Possession and Politics, and Timid Souls series, Melanie loves all things romance, comedies and suspense in particular because it’s boring to only stick to one sub-genre! From light-hearted comedies to sexy thrillers, she likes to mix it up, but loves her some strong alpha males and sassy heroines.
Go visit Melanie’s website and sign up for her newsletter to stay updated on release dates, teasers, and other details for all of her projects!

“I always knew I would fall in love with you,” he said softly, “but you were never supposed to love me back.”

— Priscilla Glenn, Back to You