Chapter Reveal from Beasts of the Frozen Sun by Jill Criswell 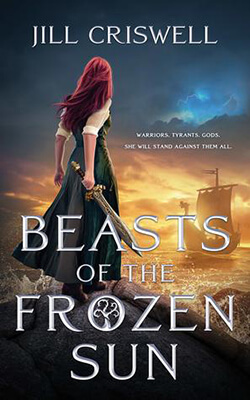 Beasts of the Frozen Sun

Burn brightly. Love fiercely. For all else is dust.
Every child of Glasnith learns the last words of Aillira, the god-gifted mortal whose doomed love affair sparked a war of gods and men, and Lira of clan Stone knows the story better than most. As a descendant of Aillira and god-gifted in her own right, she has the power to read people’s souls, to see someone’s true essence with only a touch of her hand.
When a golden-haired warrior washes up on the shores of her homeland–one of the fearful marauders from the land of the Frozen Sun–Lira helps the wounded man instead of turning him in. After reading his soul, she realizes Reyker is different than his brethren who attack the coasts of Glasnith. He confides in her that he’s been cursed with what his people call battle-madness, forced to fight for the warlord known as the Dragon, a powerful tyrant determined to reignite the ancient war that Aillira started.
As Lira and Reyker form a bond forbidden by both their clans, the wrath of the Dragon falls upon them and all of Glasnith, and Lira finds herself facing the same tragic fate as her ancestor. The battle for Lira’s life, for Reyker’s soul, and for their peoples’ freedom has only just begun.

That night I entered the hovel cautiously, as if walking into a wolf’s den.

Over the years, I’d taken in all sorts of injured creatures. I’d bandaged wings and paws, fed and soothed each animal until it was healthy and strong enough to set free. For my efforts, I’d been growled at, scratched, bitten. I knew the risks of aiding dangerous predators.

As soon as I stepped inside, I was knocked to the ground.

The warrior pinned my wrists, bending over me. Naked, glistening with sweat, eyes bright with madness. Even now, I didn’t see a monster. I saw a wounded wolf, alone, afraid.

I pulled one wrist free, smacking him on the nose, showing I was neither adversary nor prey. “You won’t hurt me. I’m the only one who can help you.”

Eyes wide, he slouched back.

I sat up slowly, lifting a hand to his brow. “You’re burning up.”

He regarded me suspiciously, until something captured his attention. My skirts had bunched at my thighs. In a blink, the warrior snatched my knife from its sheath.

“You won’t hurt me,” I said again, less certain. I plotted a path around him to the door, the dodges and strikes I could use to evade him.

He pressed the blade to his own throat. Crimson leaked down his skin.

“No!” I wrestled the knife from him and tossed it away. The warrior’s shoulders sank, as if I’d stolen his last shred of hope.

Gripping his jaw, I examined the wound—the cut was small but deep. I tore cloth from the blanket, pressing it to his neck to staunch the blood. “What were you thinking?” I asked, even though I knew. Pulling him from the harbor wasn’t saving him, but capturing him. Too sick to leave, he was a prisoner in this hovel, waiting to be tortured, executed. That’s what men did to their enemies. That’s what the Sons of Stone would do if they discovered him.

He stared at the fallen knife.

If he’d had the strength, he would’ve shoved me aside and grabbed the blade. I saw him calculating his odds as it was, but then the fever took hold. He coughed, fighting for breath, the sound wet and sharp, sawing through his lungs. Of course he’d not hesitate to slit his own throat, when he faced death from every direction.

I thought of Rhys as a boy, ravaged by lung-fever, moaning in his bed. This warrior wasn’t Rhys, but he was someone’s brother, someone’s son. “You’ll be all right. I’ll look after you.”

“Draepa,” he wheezed, pointing at the knife, then me, making a stabbing motion into the side of his neck. “Draepa mir.”

“Draepa mir!” His shout made him cough again. Between coughs, other sounds rose. Laughter. Sobs. He laid his forehead in the dirt, hacking and gasping, crying and laughing, fingers clawing at the earth. Had the fever cracked his mind?

“Shh.” I eased his head onto my knee. At my touch, he tensed. He coughed, growled, and wept, face buried in my skirts. One hand curled around my ankle, as if searching for an anchor to hold fast to in a storm. His fingertips traced the ring of scars there.

To distract him from his misery, I moved my leg closer and told him my story.

“I was nine years old, playing with my brother and his friends in rowboats just beyond the harbor. I’d begged Garreth to take me along, and he took pity on me. The weather turned foul, and a wave as high as a horse capsized our boats. Something circled us in the water.”

The sensations came back fresh: the churning sea, Garreth’s arm around me, slick scales brushing my leg. “It was the Brine Beast. A giant sea creature that sinks ships and devours fishermen. It took three other children first.”

I couldn’t bear to speak their names. Their bodies had washed ashore in pieces, just like the Westlanders’ corpses. My cousin, Madoc’s only son, had been one of them.

I slid my fingers under his, feeling the indentations of needle-sharp teeth. “I remember fangs closing around my foot. My brother screaming as I was snatched from his grasp. The cold, dark heart of the sea as the Beast dragged me down. Staring at the slithering shape of my own death. I didn’t realize the Beast had let me go until Father pulled me to the surface. The men had run for boats when they heard our cries. Mother …”

I swallowed hard and tried again.

“My mother was on the shore. After the Beast pulled me under, she walked into the sea. No one stopped her. No one knew what she’d done until she didn’t resurface. They searched, but never found her body. Many in Stony Harbor believe the Brine Beast came that day to steal one child from each of the wealthiest families in the village as payment to the sea goddess Faerran, who provides for our people. My mother offered herself to Faerran in my stead, and the goddess accepted.”

I looked at the warrior lying quietly in my lap, listening. I didn’t wipe away the tears flowing down my cheeks. “Now we’ve both bared our pain.”

He’d shifted onto his side, hair falling across his face. One of his hands still held my ankle, rubbing the scars. The other touched the matching bites on his torso. “Sjaeskjir? Beast?”

“Beast,” I confirmed, watching him. Did he understand my language?

“Yes. The Beast took my mother.” Easing my legs from beneath his head, I fetched my satchel. “Medicine. To cure you.” I held up a vial of bright green liquid. He eyed it dubiously. “If I meant to harm you, I’d have done it already. And so would you, when you had the chance. We must learn to trust each other.”

His stare was unrelenting. Seconds passed.

Finally, he gave a slight nod.

Before he changed his mind, I opened the vial and held it to his lips. When he gagged, I clapped a hand over his mouth until he swallowed. With his last bit of strength, he crawled onto the blanket and submitted to sleep.

The teeth marks the Brine Beast left on him were inflamed. I bathed his fevered flesh with what was left in the waterskin, rubbed liniment into the wounds along his stomach and chest to stave off infection. “Not an ice-hearted beast under there, are you?”

He grabbed my wrist, startling me.

“Lira.” My name sounded beautiful and strange on his tongue, swelling from a drop to an ocean between the cradle of his mouth and the space separating us. He folded my hand into his, rapping my knuckles against his chest. “Reyker.”

His lips twitched. Not a smile; more like a tiny flame in a dark cavern. It was the smallest of gestures. But it was a beginning. 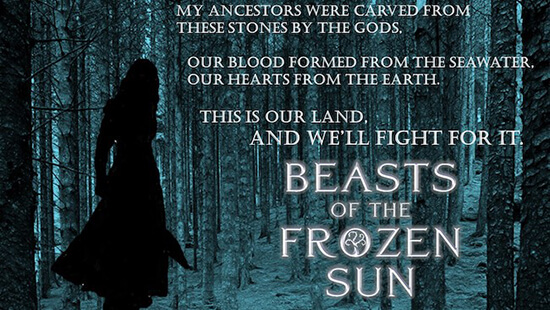 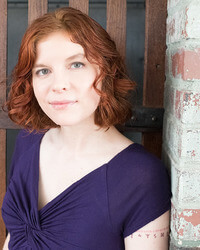 Jill Criswell is a writer of Young Adult Historical Fantasy. She was born and raised in the swamps of northeastern Florida. She earned degrees in English and Psychology and an MFA in Creative Writing from the University of Central Florida. Her greatest passion, besides reading and writing, is traveling the world; she's visited fifty countries across six continents, falling in love with places like Iceland, Namibia, and Cambodia. She works as a university English teacher and lives in South Carolina, near the foothills of the Blue Ridge Mountains, with her husband and daughter (who is named after a volcano in Iceland).

Blitz-wide giveaway (US only)

Signed copy of Beasts of the Frozen Sun