Sneak Peek from Eye of the Hurricane by Ophelia Bell 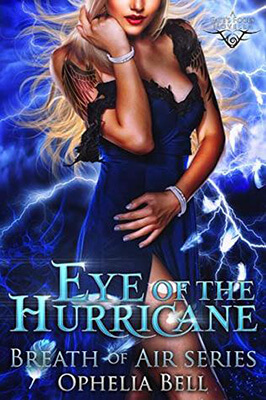 My name is Aella, and Fate wants me dead.

According to entertainment news, I’m the Angel of the Las Vegas Strip, the most sold-out singer at the Pandemonium Casino. According to the higher races—who I didn’t even know existed up till now—I’m part of the bloodline, which means I’m part-human, part-something else.

It also means I’m a threat to Fate’s precious balance.

To protect me from Fate’s wrath, three demigods have taken it upon themselves to act as my guardians—and lovers. But with the hounds of Fate nipping at my heels, can the Winds tear themselves away from their sibling rivalry over my affections long enough to keep me safe?

And why do I have to choose?

Warning: This book is a standalone novella set during Ophelia Bell’s epically sexy “Fate’s Fools” series. It is a fast-burn HOT and steamy RH odyssey, not meant for the faint of heart (or libido)… #whychoose!

“So you’re some kind of wind magician?” I asked, astounded that I’d even suggested magic was real. And yet when I said it, I knew I was on the right track.

Over the past few weeks, I’d seen more and more things that just seemed out of the ordinary in a way that went beyond normal human weirdness. Even a place like the Vegas Strip had its limits for the odd and unexplained. What I’d seen recently was more… supernatural.

Baird took a step toward me, closing the distance. “No, Aella,” he said, gripping the jumpsuit bunched at my hips and pushing it down. “I am the wind.”

He wrapped his arms around me and picked me up, and in one smooth motion, he spun us and leaped off the ledge overlooking Las Vegas.

I yelped in surprise, clinging to him when I realized we had just dived off the Stratosphere without a fucking harness.

“I’ve got you,” he said as we plummeted.

“Yeah, but who the fuck has you?” I blurted, my voice pitched close to panic, then broke into hysterical laughter when I realized I’d just channeled Lois Lane. My secret admirer was fucking Superman.

A snapping noise like sails in the wind hit my ears and I opened my eyes again, but instead of the sky behind Baird’s shoulder, there was a pair of enormous wings feathered in shades of deep gray and striped with white. They beat with slow, strong strokes, and the wind cascaded across my back as we rose higher into the air, soaring away from the Stratosphere and over the Las Vegas Strip. 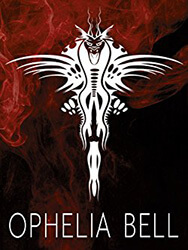 Ophelia Bell loves a good bad-boy and especially strong women in her stories. Women who aren't apologetic about enjoying sex and bad boys who don't mind being with a woman who's in charge, at least on the surface, because pretty much anything goes in the bedroom.

Ophelia grew up on a rural farm in North Carolina and now lives in Los Angeles with her own tattooed bad-boy husband and four attention-whoring cats.