Interview with Darcia Helle – author of Into the Light 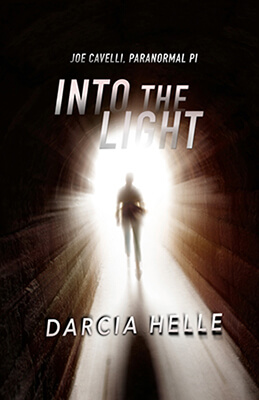 Max Paddington refuses to go into the light until he finds his killer. This presents a dilemma, since Max is even less competent as a spirit than he was as a live person. No one sees or hears him and he can’t manage to get anywhere or do anything on his own.

Joe Cavelli is a private investigator, living an ordinary life. Then one day he walks across a parking lot, gets yelled at by a ghost, and his life only gets stranger from there.

Max and Joe team up to find Max’s killer. In the process, they form an unlikely friendship and change each other’s lives in ways they never expected.

What would you say is a typical day in the life of Darcia Helle?

DH: When I was young, I thought an author’s life must be glamourous. I envisioned lots of travel, closed-door meetings with important executives, and a beautiful office with an enormous mahogany desk surrounded by packed bookcases. I do have a room with lots of built-in bookcases, thanks to my husband, but that’s about as far as my youthful fantasy played out in real life.

A typical day for me starts with a sleepy-eyed commute from bedroom to kitchen, navigating around and tripping over three dogs and a cat. I brew an enormous mug of Earl Grey tea, then jockey for position on the couch with my laptop, all while trying not to spill tea on the keyboard, myself, or one of the animals. I’m not as agile as I once was, and so this is a noteworthy feat.

The great thing about working from home is I have no set schedule. The challenge is not giving in to the urge to go back to bed with a stack of books and an entire cheesecake.

S.E. Hinton’s The Outsiders was one of my earliest influences. I read the book when I was about twelve, and it’s the first time I clearly remember being deeply moved by a novel. Though I didn’t realize it at the time, The Outsiders was likely the first to influence my preference for reading and writing character-driven fiction that explores conflict and the darker aspects of human nature.

Where do you do your best writing from?

DH: In the shower. Seriously. That’s where I solve plot problems and come up with the best ideas. If only I could figure out how to transfer my thoughts directly to my keyboard, I could have an entire book written after a week’s worth of showers.

Why did you choose to write in your genre?

DH: It’s funny to consider that I ever had a choice. Writing is something I’ve always done, since I was first able to gather words into a sentence, and I never choose to write within any specific genre. I just write what’s in my head, and it turns out that all of it falls under the suspense heading. So I guess the genre chose me.

Is there anything about your style of writing or genre that you find particularly challenging?

DH: My writing style requires me to “become” the character and feel the emotions. It’s not a method I learned or decided on; it’s the only way I know how to write. If I’m writing from the perspective of an abused woman, I need to feel that fear, anxiety, and helplessness. If I’m writing as a psychopathic killer, I need to feel that craving to destroy another human. Consequently, the process can be emotionally draining, particularly with my darker suspense novels. Because I take on those moods and emotions, the feelings can be difficult to shake off afterward.

Can you tell us more about your upcoming release Into the Light?

DH: This book has been out for several years already. It was supposed to be a stand-alone, but the voices in my head had other ideas. When I started writing Out of the Darkness, the second book in this accidental series, I had to get the cover for Into the Light updated and do a soft relaunch to announce the series.

I had a lot of fun writing Into the Light, once I gave in to Max’s demands. He was one of my most stubborn characters. I know many readers think we writers make our characters bend to our will, which some writers do, but I’m not one of them. I have no control. My idea was for Max to be less centerstage, with the focus more on Joe and a different sort of investigation. But Max’s personality was larger than life. I couldn’t wrestle him into the part I wanted him to play. Once I gave in, the entire story fell into place.

What do you think readers will love most about Into the Light?

DH: I wish I had the perfect answer to entice everyone to read the book! Unfortunately, I don’t think it works that way. We each experience a book differently, largely because we take our own biases, needs, likes, and dislikes into the story with us. What I hope readers will love is the emotional honesty of the characters, because that’s something I always strive for. I also hope they enjoy moments of laughter and moments of reflection.

If you were to make this book into a movie who would you want to play the leads?

DH: I don’t do well with this question. I honestly have no idea at all. I’d need a casting director. Or someone who’s read the book and is familiar with the current celebrity talent.

DH: Long ago, while I was writing my first book, I worried it was the only idea I’d ever have. Now, twelve novels later, I know without question that the concern isn’t running out of ideas but having time to write all the stories that are in my head. My plan is to write as many of those stories as possible. I have ideas for several more Joe Cavelli, Paranormal PI novels, plus I’ll be continuing my Michael Sykora series and my Chasing the Night series. Then there are the stand-alone novels awaiting my attention, as well as co-writing projects with my fellow author, Maria Savva.

What question do you wish someone would ask about you or your book? (then answer it)

DH: Wow. This is a difficult question. Here’s the problem: I’m a total introvert. Being the focus of attention makes me uncomfortable. I’m not one of those writers who meets people in public and talks about my books. I wish I was! And I rarely talk about myself at any length. Instead, I’m one of those people who deflects, which is what I’m doing now. 😊

The other problem with this question is that I’m far more interested in hearing other people’s thoughts and feelings. I don’t learn anything by talking about myself, but I learn a lot by listening (and reading). So, after much deliberation, I have to say that the question I wish someone would ask me is whatever question he/she most wants answered. In that sense, I’d be learning something about what people—or at least that one person—care about, while also sharing a bit of myself. 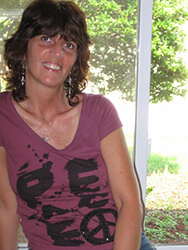 Darcia Helle is a Massachusetts native, who escaped the New England winters to write in the Florida sunshine. She lives with her husband in a home full of spoiled rescue animals and an occasional stray lizard. She writes because the characters trespassing through her mind leave her no alternative.

Visit these other great hosts on this tour for more great reviews, interviews, guest posts, and giveaways!

“Hey! I thought you said you were gay!” the man said accusingly.
Without missing a beat Jason said, “She is. I’m just her bitch.”