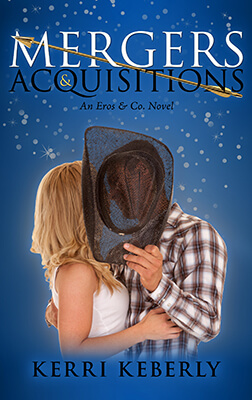 A god with a complex. Egotistical Apollo is cursed to chase only one woman—the water nymph Daphne. When she suddenly disappears after three centuries avoiding his unwanted attention as a tree, more than his reputation as Mount Olympus’s revered victor is at stake.

A nymph on the run. Tired of living her best life as a tree, Daphne transforms back into a nymph and makes a break for it. She hides in the last place she thinks the god of every damn thing will look. But after finding herself in the kitchen of down-to-earth mortal Sam Carson, she discovers she might just want to stop running after all.

What on Earth could possibly go wrong? A story of unrequited love, self-discovery, and redemption…This modern-day twist on a centuries-old myth will have you rooting for love from start to finish.

The scorching Oklahoma sun beat down on Daphne. She didn’t mind, though, because she was at what was quickly becoming one of her favorite places in the world. The Caddo County farmer’s market.

“Thanks for the ride, Judy,” she said before proceeding to unload a few dozen baskets of vegetables from the back of the pickup truck. It belonged to Judy Pitkins, one half of the adorable old couple that lived a mile down the road from Sam.

“You bet, Dee.” Judy wiggled her fingers at her before heading to her table to arrange jars of preserves next to the metal tabletop rack adorned with handmade wind chimes and dream catchers.

The brim of her cowboy hat protected Daphne’s face. Her arms, however, got the full brunt of UV rays as she carried the large baskets over to the permanent vegetable stand Sam had built several years ago.

“Remember to drink plenty of water, missy. She’s a hot one today.” Judy called out to Daphne when she walked by with the last bushel of radishes.

Sweat dotted Daphne’s upper lip as she made sure the tape holding the “ART FOR SALE” sign to the front of the table she’d set up next to the vegetable stand was secure. She took off her hat to swipe at her forehead with the back of her hand before using it to fan herself. Hat replaced atop her head, she settled into a folding chair. After hooking the heels of her boots on the support bar, she took a long sip of her vanilla iced latte and leaned over to arrange the small watercolor paintings for optimal viewing.

It was her third time at the market. She’d sold a lot of vegetables, sure, but she’d gotten a lot more than money in return. She’d made friends, and she’d even made sixty dollars of her own so far selling paintings. True, most folks just wanted to look, but if she struck up a conversation, asked them about their lives, they tended to do more than that. Their smiles were all different, crooked ones just as precious at the straight ones. Their bellies jiggled when they chuckled. Their eyes sparkled when giggles turned into laughs, the corners crinkling into beautiful lines, showing signs of good times and bad. And with each person who stopped by her table, she fell a little deeper in love with the human race.

On the other hand, while it felt amazing to get to know them, to hear their stories and grin at their gossip, she’d probably have the money she needed to pay back Sam for the boots sooner rather than later. Once she paid him back, there was really no good reason to stick around.

She was getting too attached to Sam, which was not the plan.

She inhaled a lungful of dusty air, resigned not to think about that just yet, and opened the romance novel Judy had lent her. Absently shaking the ice in her clear plastic cup, she continued to read about rakish dukes falling in love with independent ladies. She bit her bottom lip as her eyes raced across the page, devouring each word and trying not to miss a single one while also trying to get to the good part, the part where they . . .

“I’ve often wondered what radishes tasted like,” a voice interrupted her reading.
It was deep and smooth. Regal in pitch and tone. Familiar.

Daphne bolted upright, heart pounding hard and fast like the hooves of a wild mustang. She wanted to take off like one, too. The book in her hand bounced off her leg before falling to the ground, as a book tends to do when the person holding it loses feeling in their fingers.

“I jest. I prefer Ambrosia.” Apollo peered down at her with those striking blue eyes of his. “Hello, Daphne.”

An alarmed huff rocketed from her throat, followed by a scratchy whisper. “How? How did you find me so fast?”

His gaze dropped to the card table for an instant. “It wasn’t that difficult.”

Daphne’s head throbbed against her temples in time with her frustration. Why? Why? Why? “Why can’t you leave me be?”

“Come now, Daphne.” Apollo tapped his fingers on the table twice, as if he had no time or inclination for ignorance but was trying to remain patient. “We both know the answer to that.”

Her cheeks grew hot, and her lips pressed together. He was being patronizing, and the fists at her sides itched to thank him for it by landing a solid punch.

Apollo took stock of her tightly balled hands, the firm set of her jaw, the daggers shooting from her eyes. “I know you dislike me.” There was an uncharacteristic air of uncertainty in his words. “But I think it’s just because you don’t know me. We’ve never really gotten a chance to get to know one another.”

Daphne launched the daggers at him. Was he serious? She knew exactly who he was, a relentless bastard. What else was there to know?

“The real me,” he finished hastily.

“Is there a real you? The mighty Apol—” She caught herself and stopped. The young woman at the table to the right gazed out over the market, pretending to be oblivious to the commotion, but Daphne knew better. As much as the residents were growing on her, this was a small town, with a close-knit community of folks who made it a point to know every birth and keep track of every death. Who knew who was dating and who’d just broken up. And who was fighting with whom. Caddo County was one giant grapevine.

Daphne snorted. “Paul?” Clever, but he was still an asshole. “Worshiped and adored for his brilliance.”

“And strength,” he added, his eyebrows lifting. “You know, because I’ve single-handedly won . . .”

Did he really think she would finally, after all these centuries, be impressed?

“Ugh.” Daphne groaned. She was the furthest thing from it. “My gods, you are the worst.”

Was that hurt flashing in his sky-blue eyes, darkening to storm cloud gray as he spoke? His golden aura heated, glowing like the sun, and Daphne cringed.

“The worst at anything,” he finished. “Please don’t make this harder than it has to be. I’ve changed—or at least I’m trying. Look, I have a plan. All you have to do is trust me.” 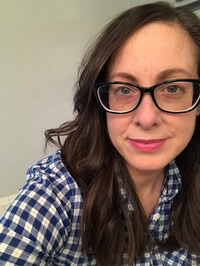 Kerri has always told tall tales. When she was in the third grade, she hid her glasses in the linen closet and told her mother a ghost must have stolen them. As you might imagine, that story didn’t end well.

Today, however, she tells more lighthearted tales, with happier endings. Fond of making people laugh, and forever a fan of folklore and mythology, she blends heart and humor with a dash of magic into her stories.

Kerri lives in Michigan with her husband, son, and cat they lovingly but aptly refer to as The Maleficence, Mel for short.
https://BookHip.com/VSFGCV
https://www.bookbub.com/authors/kerri-keberly