Sneak Peek from What She Didn’t See by Heather Wynter

What She Didn’t See

An American tourist in Rome. A secret service agent on vacation. An international assassin… What could go wrong?Gracie Colby and Lena Boyd are wrapping up the tour of Italy Lena has planned her whole life. Luke Barnes, a Secret Service Agent, is on vacation in Rome.
Before she knows what happened to her, her friend is dead, and Gracie finds herself swept into a whirlwind of danger, intrigue, and international forces conspiring to destroy her. Teaming up with Luke to survive, Gracie is forced to question herself and decide if she is capable of outrunning the assassin before he can get to them.

Grace floundered to her feet and staggered to the gun. She picked it up and fumbled it into position, but once she got her finger around the trigger and the barrel pointed in the right direction, something strange happened.

She couldn’t shoot. She couldn’t kill anybody, not even Asheim. Not even the man who killed her best friend. She wanted to more than anything, but her body wouldn’t obey her brain’s command to pull the trigger. It just wasn’t in her nature. She’d spent her life obeying the law. She considered herself a good person. All her family and friends were good people.

And she never realized how intense it was to take someone’s life, no matter who that life belonged to, until she was in this position. She wasn’t a murderer. She couldn’t go against that now, not even to save her own life. How could she live with blood on her hands?

She stood there like a moron, watching Asheim seize Luke by the hair and swing back his fist. Holding Luke in position with one hand, he punched Luke as hard as he could and let Luke’s form wilt back onto his knees. She screamed with every ounce of strength she could muster. 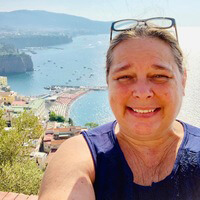 Heather Wynter grew up in California, where she still lives with her two dogs and three cats which she lovingly refers to as her zoo. She's a sucker for any period drama and a good romance. When she isn't reading or writing out what is in her wild imagination, she's probably at Disneyland or traveling around the globe.

“She needed to appreciate the art of violence, the beauty in fear, the fragility of her own life.”