Book Review: The Fifth to Die by J.D. Barker is Superb! In the thrilling sequel to The Fourth Monkey, a new serial killer stalks the streets of Chicago, while Detective Porter delves deeper into the dark past of the Four Monkey Killer.

Detective Porter and the team have been pulled from the hunt for Anson Bishop, the Four Monkey Killer, by the feds. When the body of a young girl is found beneath the frozen waters of Jackson Park Lagoon, she is quickly identified as Ella Reynolds, missing three weeks. But how did she get there? The lagoon froze months earlier. More baffling? She’s found wearing the clothes of another girl, missing less than two days. While the detectives of Chicago Metro try to make sense of the quickly developing case, Porter secretly continues his pursuit of 4MK, knowing the best way to find Bishop is to track down his mother. When the captain finds out about Porter’s activities, he’s suspended, leaving his partners Clair and Nash to continue the search for the new killer alone.

Obsessed with catching Bishop, Porter follows a single grainy photograph from Chicago to the streets of New Orleans and stumbles into a world darker than he could have possibly imagined, where he quickly realizes that the only place more frightening than the mind of a serial killer is the mind of the mother from which he came.

Another dark and terrifying thriller at it’s best! J.D Barker has done it again with this second book in the 4MK Thriller Series, The Fifth to Die.

First…  If you haven’t read the first book, The Fourth Monkey, then FULL STOP! You must read book 1 before The Fifth to Die. (check out my review of The Fourth Monkey).  So, while I know my review will be a bit vague; know it’s for your own good  😉  Don’t want to give too much away and ruin the fun!

This next installment, The Fifth to Die, is even more gory and horrifying. Detective Porter and team are back.  And of course, my favorite serial killer, Anson Bishop, who I both adore and hate in equal measure (sad but true LOL) is just as intriguing as ever.  With moments of charm and moments of holy shit crazy.

Porter is falling even further down the rabbit’s hole; while another series of gruesome murder’s are being investigated. Porter’s on edge and obsessed with learning more about Bishop in the hopes of catching him. But that’s not all…

There’s a bigger picture and we learn a lot more about Anson Bishop and his past. I wanted to know the diary’s relevance. Are some parts fact or fiction? Or was it all made up? OR worse was it all true?! I was dying to know.  Of course, so was Porter.  So, there was a great element of suspense I thoroughly enjoyed in this plot line of the overarching story.

As I neared the end I kept saying to myself “I don’t get it” (of course that could have something to do with being up all night cuz I couldn’t put the freakin’ book down!! LOL) Then Pandora’s box is blown open and BOOM, we’re thrown for yet another loop.

We’re introduced to some new characters and learn more about others. I thought it gave the investigative team more depth and personality. As a result, the 4MK world became more dynamic and I ended up becoming totally invested in a way I wasn’t before.

There is more going on in this book then the last. There are multiple points of view with a story line that was at times just a tad too busy. However, that didn’t diminish my enjoyment of the book.

Now, while J.D. Barker has crafted another masterpiece of horrifying thriller, I dropped my rating by a measly 1 star because there were times, in my opinion, that too much was going on.  I was also a little disappointed with how fast things seemed to come together at the end.  It felt a wee bit rushed.  I will say that the ending beautifully stages the scene for Book 3; which I can’t wait to read!

I received an eARC of this book from the publisher via Netgalley. This review was voluntary and all opinions and thoughts are my own.

If you’d like to learn more about J.D. Barker, check out my interview with him by clicking HERE. 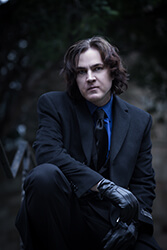 Barker was born January 7, 1971 in Lombard, Illinois and spent the first fourteen years of his life in Crystal Lake, Illinois. A staunch introvert, he was rarely seen without a book in hand, devouring both the Hardy Boys and Nancy Drew series by the age of six before moving on to classics such as the works of Dickens and Twain. The discovery of Shelley, Stoker and Poe fueled a fire and it wasn’t long before he was writing tales of his own which he shared with friends and family. These early stories centered around witches and ghosts thought to inhabit the woods surrounding their home.

At fourteen, Barker’s family relocated to Englewood, Florida, a climate better suited to his father’s profession as a contractor. He attended Lemon Bay High School and graduated in 1989. Knowing he wanted to pursue a career in the arts but unsure of a direction, he enrolled at the Art Institute of Fort Lauderdale where he later obtained a degree in business. While in college, one of his writing assignment found its way into the hands of Paul Gallotta of Circus Magazine. Gallotta reached out to Barker and asked him to join the staff of 25th Parallel Magazine where he worked alongside the man who would later become Marilyn Manson. Assignments dropped him into the center of pop culture and by 1991 Barker branched out, interviewing celebrities for the likes of Seventeen, TeenBeat, and other national and local publications. In 1992, Barker syndicated a small newspaper column called Revealed which centered around the investigation of haunted places and supernatural occurrences. While he often cites these early endeavors as a crash course in tightening prose, his heart remained with fiction. He began work as a book doctor and ghostwriter shortly thereafter, helping others fine tune their writing for publication. Barker has said this experience proved invaluable, teaching him what works and what doesn’t in today’s popular fiction. He would continue in this profession until 2012 when he wrote a novel of his own, titled Forsaken.

Stephen King read portions of Forsaken prior to publication and granted Barker permission to utilize the character of Leland Gaunt of King’s Needful Things in the novel. Indie-published in late 2014, the book went on to hit several major milestones – #2 on Audible (Harper Lee with Go Set a Watchman held #1), #44 on Amazon U.S., #2 on Amazon Canada, and #22 on Amazon UK. Forsaken was also nominated for a Bram Stoker Award (Best Debut Novel) and won a handful of others including a New Apple Medalist Award. After reading Forsaken, Bram Stoker’s family reached out to Barker and asked him to co-author a prequel to Draculautilizing Bram’s original notes and journals, much of which has never been made public. The novel, titled Dracul, sold at auction to G.P. Putnam & Sons, with film rights going to Paramount. Andy Muschietti (IT, Mama) is attached to direct.

Barker’s initial indie success drew the attention of traditional agents and publishers and in early 2016 his debut thriller, The Fourth Monkey, sold in a series of pre-empts and auctions worldwide with Houghton Mifflin Harcourt set to publish in the U.S. and HarperCollins in the UK. The book has also sold for both film and television.

Barker splits his time between Englewood, FL, and Pittsburgh, PA, with his wife, Dayna.

This author is new to me, looks like I need to pick this series up – thanx for the review!

This author has been on my radar for a while now. I LOVE thrillers/crimes with serial killers. I do have The Fourth Monkey on my TBR and I really need to start reading it soon so I can catch up to the second book in the series.

Me too. Not sure why I didn’t start the first book sooner! But once I did….

I really want to read this series. It looks like something I would enjoy.

Great! Hope you enjoy it:)

I don’t know that I’ve ever read a truly gory thriller or horror book before, maybe a genre to try! Thanks for sharing.

You”re welcome! If you decide to try be warned bwahahaha

This one looks like it will give me nightmares! Great review, glad you enjoyed the thrilling ride it took you on.

It almost did give me nightmare! LOL

This sounds like my kind of read. I love thrillers. Great review.

Thank you so much! You’re right! Don’t loo at this one until you finish Fourth Monkey! I’d love to know what you think 🙂