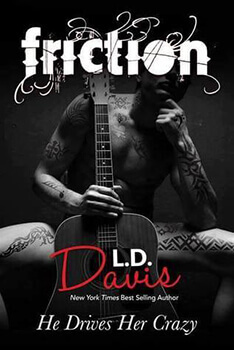 This is a standalone Rocker Romance told primarily from Noa’s POV. It’s the first book I’ve read by L.D. Davis so I wasn’t sure what to expect when I started this one. Basically this story starts as it says in the blurb when she’s almost trampled to death. She’s rescued by Alden who takes her back stage for help. When she regains consciousness and their eyes meet (her scowling and him grinning) the “friction” begins between these two. She can’t stand him because he’s a narcissistic manwhore. She blames him and his cocky pelvic thrusts for getting hurt and Alden can’t believe how much Noa hates him; I mean who wouldn’t love the super sexy egocentric rock star right?? Alden wants Noa in a bad way but Noa has had a rough life and her last relationship was abusive and she’s still dealing with those demons and doesn’t want to get hurt. She’s an author who lives a quiet life so Aldens fame and over the top personality definitely cramps her style! Alden won’t quit his pursuit so he starts to convince Noa to attend several charity galas with him as just “friends”. Even though she’s not keen on the idea she decides that the publicity would be good for her career so she agrees to go. As they travel across the country Noa starts “hating” Alden less and less and we start seeing the love-hate friendship slowly turn to love.

I’ll be honest, when I started reading I was put off by how much Noa hated Alden at the start. I can understand really disliking someone who comes across the way Alden does but I didn’t think the level of venom she spews was warranted. It was too extreme for the situation. I almost wanted to set the book aside as I quickly started to get annoyed with Noa’s character. But I hate not finishing what I start! So I kept go and am so glad I did. As I got to know Alden and Noa I found myself becoming more and more invested in their relationship. Noa’s snarky, sarcastic, and general firecracker. Her personality grew on me and I ended up loving her. Her self-image is warped and Alden helps her realize how beautiful she is. Alden is actually a sweet, protective warm hearted guy; though he can still be a huge conceited jackass (I love it lol). He is persistent and determined to win Noa’s heart. There verbal banter was hilarious and they’re interaction at times explosive and sweet. Though there isn’t a lot of sex compared to other similar types of rocker romances, when they do turn up the heat it was HOT!!! The chemistry off the chart and steamy

There was some angst. The majority of which occurred nearing the end of book so it felt rushed with quick resolution. I loved the epilogue! It was so sweet and satisfying. This was an unexpected treat!!!! I’ll definitely be checking out more of L.D. Davis’s work.

“I was in love with her; couldn’t imagine my life without her in it; but at the same time, I wanted her to have better.”