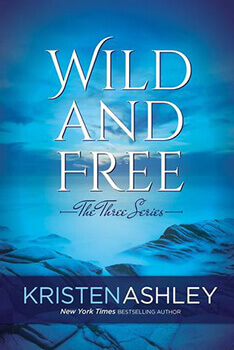 Abel Jin and Delilah Johnson have lived their lives with a hole in their soul, yearning for something they don’t understand.

Until one night Delilah is in mortal danger and a man who’s otherworldly strong and supernaturally fast saves her. Delilah is then cast into a world where fiction comes to life in the form of Abel, her destined mate, a vampire/werewolf hybrid who claims her at first breath as his.

But Abel knows the danger isn’t done. He’s dreamed for centuries that his mate will perish and he will stop at nothing to keep her safe.

For Delilah, she’s not only coping with fantasy come to life, but a mingling of very different families. Not to mention, she has on her hands a man who doesn’t understand his true nature and has lived his long life thinking he’s a monster.

Abel and Delilah together fills the hole that has been clawing at them for decades. But finally finding each other, it also tips their destinies as the last of The Three. They must unite with the other destined lovers, who with Abel and Delilah, are fated to save the world.

Ok, excited is a bit of an understatement. Usually, I avoid reading series until all the books are released unless each book is complete as a standalone. I’m waaaaay too impatient! My little heart can’t take the excitement. But I made the mistake of reading the first two books last year and have been waiting eagerly for the last book (But hey this is Kristen Ashley, I just couldn’t help myself!). So when I finally got my paws on the book and was not disappointed! Yet another fabulous read and may I think a nice conclusion to The Three Series. If you haven’t read the first two books you’ll need to read those first..

This book tells the story of Delilah (aka Lilah) and Abel; the last couple of the three whom we were introduced to in the previous books. This story is from multiple POV’s and there is A LOT happening in this book. So even though this book does tell the story of Delilah and Abel there is a lot going on outside of their direct relationship including a bit of romantic sub-plot on the side!!!

Lilah is the human mate to Abel who is half werewolf & half vampire. They first meet when Delilah is attacked and of course her fated mate by the name of Abel shows up and saves her and brings her back to his house where she meets Abel’s “family”; and thus begins our story. There is some insta-love going on here. Both have been feeling like something is missing for their whole lives and when they meet they realize they’ve found their other halves.

First off when they get together they are waaaay HOT! Scorching! The connection is intense and sex off the chart. Total Kristen Ashley sexy goodness. She’s the bomb at writing a fab sex scene. I was actually a bit jealous of Lilah LOL I need me some Abel action!!!! Anyhoo I digress (did I mention I need me some Abel….). Abel is takin in as a baby by a Chinese family and remained with the family, who cared and protected him, over the course of generations. Of course, he took care of them in return and we see a very sweet and funny group of “brothers” who I absolutely loved! Because of this Abel has not been exposed to the supernatural world and does not fully understand his nature. When they finally meet the other couples comprising the three (Lucien/Leah, Sonia/Callum) they are attacked and are whisked off to a compound for protection. Here we see more development of the relationship between the MC’s and the supporting characters. We witness Abel’s journey to understand his true nature and that he’s not alone in the supernatural world. It was emotional, sweet and gave me warm and fuzzies.

Callum leaned toward Abel. “Feel it,” he said quietly. “Abel, you’re fortunate. I know. You have many brothers, as do I. But now, you have two more.” ~Callum

Lilah and Abel become even hotter and let me tell you they are absolutely made for each other in every way. I really liked Lilah. She was strong without being overly abrasive and annoying. She’s carefree and open with everyone with real love of life. The communication between the two is great as a result there was next to no angst between them within their relationship. This isn’t surprising since soooo much was going on in the story.

And of course there are side characters that are hilarious and provide just the right amount of levity to keep an otherwise serious story from getting to heavy. I loved Lilah’s father and his gang!!!

Oh and YURI! sigh…. I didn’t like him at all in the previous books because, well, he was just an overall jerk who I wanted to hit on more than one occasion. But in my opinion he totally redeemed himself. The little romance between Yuri and Aurora was sweet and hot. I loved the peek we got inside his head. I was starting to lean towards – I need me some Yuri…

“I wish to keep you with me,” he said gently. “And my further, most fervent wish is that you wish to keep me.” ~Yuri

I would have liked to see a bit more development at start of Abel’s and Lilah’s relationship. It all felt over the top rushed. I felt like all the other things going on overshadowed their romance. In fact Yuri and Aurora’s side romance sort of took away from Lailah’s and Abel’s in a way because I kept wanting to see more of them!!! Don’t get me wrong I’m not complaining, I’m just sayin!! I don’t really mind long books as long as it keeps moving. It dragged a bit in places and actually found myself tempted to put it aside for a bit GASP!! I think it could have been shortened without taking away from the story.

Overall I really enjoyed this book. We had lots of alpha maleness, hot sex, lots of lovin, romance, tons of action and solid plot. We were takin through the wringer with all the various emotions. This is something I always look forward to in Ms Ashley’s books. While the big finish was not a surprise it still left for a satisfying ending to the series, though I found the epilogue a big lacking. Once again Ms Ashley RULES!!!!

“It’s a beautiful war, baby.” He dipped so close, the tips of our noses brushed but his eyes never left mine. “And I…just… won.”