Guest Feature with Chloe Liese – Author of She’s A Spitfire 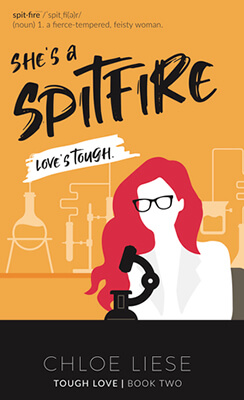 One fiery-haired, sexy scientist finds her perfect complement in a dark and handsome soccer star. Opposites attract, and they’ve got chemistry that’s explosive—literally.

Physics calls it entropy. Philosophy calls it Murphy’s Law: If something can go wrong, eventually it will. Professionally and personally speaking, Zed’s familiar with the principle. After a decade of trying to alter the atomic makeup of the mafia from its nucleus, now he’s set on leaving The Life and pursuing his heart. Problem is, the sassy, hot-headed spitfire he can’t quit is meddling in his slow burn escape plan, and turning it into full-on combustion.

Not to mention, Nairne’s got a painful history she won’t talk about and more secrets than she has lab instruments—which is really saying something. In an ideal world, the bad boy footballer would follow the brainy beauty overseas and they’d live happily ever after. But Murphy’s Law is proven true, as Zed finds his world imploding and his escape plan foiled. These enemies turned lovers end up discovering how costly it can be to meet the right person at the wrong time.

A present he can’t escape.

A past she can’t forget.

A future they won’t stop fighting for.

Book Two in the Tough Love Series—an enemies to lovers, suspenseful romance, full of sexy Italians, feisty heroines, globe-trotting action, and an ending that’ll both satisfy you and leave you ready for more!

When I decided to start writing romance, I knew I wanted my stories to represent diverse people as beautiful, sexual, and desirable. I also deeply believe in writing sex in romances because it’s a human dynamic that powerfully illustrates characters individually and in relationship to one another. I want the sex to represent real sex too—women needing their mind aroused as much as their body; men coming before the women. I also think it’s time to let BDSM (which is a small component of Nairne and Zed’s sex life) to have a place in sex without being cast as transgressive or reminiscent of Fifty Shades of Grey (FOS). I understand and appreciate that the FOS trilogy put BDSM on the mainstream romance map, but just because a book has it doesn’t mean it’s like it. I also think it’s important to let kink be anyone’s purview, and to represent that in romance. When I researched, spinal injury and sexuality, I read about how important it is for people with disability and life-changing injury who like kink in their sex life to not be excluded from it on the grounds of being considered “delicate” or “prone to further injury.” The accounts I read were women and men saying the last thing they wanted after injury was for their sexual identity and preferences to be seen as not theirs to have anymore, to have their injury define and constrict their sexuality in that way. So in these first couple of books that are Nairne and Zed’s, I’ve really tried to write books that accurately reflect the considerations, conversations, and dynamics that two people like Nairne and Zed might share. I will always aspire to write romance that allows reader’s an entertaining escape while resonating with them, as I attempt to capture the real and gratifying work of relational intimacy of the body, mind, and heart. 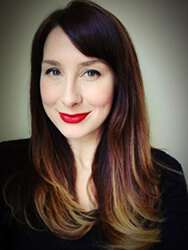 Chloe’s always been a sucker for a suspenseful steamy romance, ever since she managed to find the one saucy mystery series hiding in her high school’s prim little library. Nothing drives her crazier than a story that cranks up the heat, then closes the door on the reader’s face, so don’t read her books if you don’t want to know what actually happens when the lights fade to black…

When she’s not writing, Chloe’s busy reading books of all genres, rereading Harry Potter (which she can’t help but make her characters similarly obsessed over), and playing catch-up with her bad@$$ little girls. She’s also been known to scramble around the pitch for a pick-up soccer match and run along the river while dreaming up her next book.

“Don’t cry because it’s over, smile because it happened.”