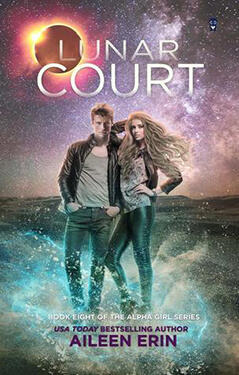 Fun. Funny. Lighthearted and sweet. Chris always manages to find beauty and laughter, even when fighting a chapel full of demons. He’s exactly what she needs. Except he’s a werewolf and she’s a member of the LunarCourt — the only fey court that holds sway over the werewolves. Even on his best day, Chris isn’t strong enough to last a few hours in the Lunar Court without becoming a slave. No matter how much Cosette’s heart wants him, she knows she has to let him go.

But when Chris goes missing, Cosette realizes how much she has to lose if the worst happens. Except her mother — the Queen of the Lunar Court — won’t let her go after Chris. Being forced to stay at court is dangerous for Cosette. Assassins keep coming after her, and unless she accepts a mate, it’s only a matter of time before one of them kills her.

Cosette is the girl Chris has always dreamed of.

Chris sees through the tough facade to the girl exhausted from a lifetime of fighting off assassins and court politics. She needs a true friend, someone who she can be herself around, and craves solitude. The same solitude that Chris craves. But he knows he’ll never be enough to survive in her world. So, when Eli — a mysterious archon — requests his help, he figures why not? The guy might be a little shady, but he needs every distraction he can get.

But when Eli says that Cosette’s in trouble, Chris is more than ready to play by Eli’s rules. At least until Eli takes him to the Court of Gales. Chris knows he’s about to play a very dangerous game. Bargaining with the fey is something only a desperate person would do. But what wouldn’t Chris give up to save Cosette’s life?

“These books go by so very quickly, with the pacing making me think I just started reading. I could gobble up a dozen of these novels!” – Carrie Reads a Lot

“Aileen Erin: You did a great job as usual and I’m so excited for Invocation and  Lunar Court.” – Lenniland

CABC: What would you say is a typical day in the life of Aileen Erin?

Aileen: I spent my mornings getting Isabella ready for preschool. No matter how early I get up, it’s always a rush. 😉 But once she’s at school (usually around 8:45), I come home and check email, post on social media, and do any indie publishing work that needs to get done. I pick her up at 11:45 (She’s only 3, so it’s a short day for her!), and talk to her about her day. Then, I hand her over to her awesome nanny. From 12:15-6:30 is my solid chunk of writing time. If there’s anything urgent left over from my morning work session, I’ll take care of that first. If not, then I like to get to writing. My best, most productive writing hours are from 1-5PM. My mind is awake and ready to go. So, I try to really take advantage of those hours to write (or edit) my books. At 6:30, my nanny goes home and we have dinner. After Isabella is asleep, I’ll either watch some TV with my husband or unwind with my Kindle. I love a good book.

CABC: Who and/or what are your biggest influences?

Aileen: I really love Joss Whedon’s work. He really inspired me growing up. I loved Buffy! I also love Anne Bishop, Maria V Snyder, Terry Goodkind, and Patricia Briggs. Their books have been an inspiration to me for a very long time.

Aileen: I was starting my MFA program and needed a project for my thesis, but I wasn’t sure what to write. But I’ve always had a love for werewolves, witches, and the fey. And I always wished I’d gone to boarding school. I don’t know why I have it idealized in my mind, but I do. At the time, vampires were getting so much love in YA Paranormal, that I wanted to give werewolves the spotlight. So, I wrote what ended up as Becoming Alpha.

CABC: What is it about the supernatural that fascinates you so much?

Aileen: I grew up Catholic, and then turned Eastern Orthodox. So a lot of the supernatural stuff to me feels real—especially the magic, demons, and angels. But if I believe in those things, then what’s to say that there aren’t werewolves in hiding somewhere? Couldn’t the fey also be real? The possibilities that come out of those kinds of ideas really get my creative juices going.

CABC: Is there anything about your style of writing or genre that you find particularly challenging?

Aileen: I love writing in first person, past tense. I love the immediacy of the YA genre. I don’t know that I find a particular part of it challenging above and beyond just writing in general. The second act is always the hardest for me, especially the first draft of the second act. The newness of the book has worn off a bit, and all the moving parts of the plot have to start lining up so that the third act can happen. It’s complicated and the longest act of the book, so it always feels like a bit of a trudge and mentally exhausting to get over that hump.

CABC: Can you tell us more about your upcoming release Lunar Court?

Aileen: Lunar Court will be the first book in the Alpha Girls series with more than one POV, which is so fun! I loved getting to explore the fey and what court life was like. This book is much more romance-heavy, with no real big bad to overcome, just obstacles really.

CABC: How will Lunar Court stand out form the other books in the series?

Aileen: I think the alternating POV will really make it stand out. It’s also the first book that doesn’t have Tessa or St. Ailbe’s in it even a little bit, which is fun! It’s also very romantic, which I hope readers will enjoy.

CABC: Ok, so I saw in your bio that you’re a big Star Wars fan!:) If you had to compare Chris to a Star Wars character, who would it be and why?

Aileen: Han Solo. For sure. He’s flirty and jokes all the time. He’s in love with a princess that he thinks is way out of his league, but actually loves him. Chris is a total Han.

CABC: As far as your writing goes, what are your future plans?

Aileen:  I’m currently working on Off Balance, the second book in the Aunare Chronicles. After that, I’ll be working on Alpha Erased, book nine of the Alpha Girls series, which will have both Tessa and Dastien’s POVs. I can’t wait to finally give Dastien the spotlight!

CABC: What question do you wish someone would ask about you or your book? (then answer it 😉 )

Aileen: Which book is the heaviest/best for hitting people? – Definitely Off Planet. It’s the longest of my books and the most useful as a weapon. 😉 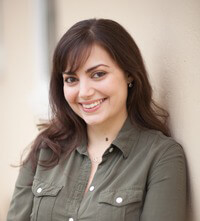 Aileen Erin is half-Irish, half-Mexican, and 100% nerd–from Star Wars (prequels don’t count) to Star Trek (TNG FTW), she reads Quenya and some Sindarin, and has a severe fascination with the supernatural. Aileen has a BS in Radio-TV-Film from the University of Texas at Austin, and an MFA in Writing Popular Fiction from Seton Hill University. She lives with her husband in Los Angeles, and spends her days doing her favorite things: reading books, creating worlds, and kicking ass.