Interview with Stephen Booth – author of Dead in the Dark 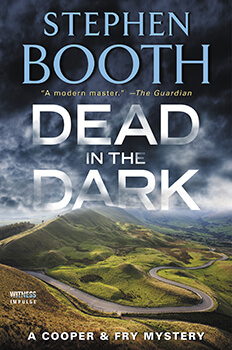 Dead in the Dark

How do you prove a murder without a body?

Ten years ago, Reece Bower was accused of killing his wife, a crime he always denied. Extensive police searches near his home in Bakewell found no trace of Annette Bower’s remains, and the case against him collapsed.

But now memories of the original investigation have been resurrected for Detective Inspector Ben Cooper – because Reece Bower himself has disappeared, and his new wife wants answers.

Cooper can’t call on the Major Crime Unit and DS Diane Fry for help unless he can prove a murder took place – impossible without a body. As his search moves into the caves and abandoned mines in the isolated depths of Lathkilldale, the question is: who would want revenge for the death of Annette Bower?

Could you please tell us a bit about yourself and what inspires you?

Stephen: I’m from an industrial area in the North of England, where all my ancestors worked in cotton mills or coal mines, and I was the first member of my family to go to college. I worked as a journalist for many years before I got a big break with my first Ben Cooper and Diane Fry novel ‘Black Dog’, and I’ve been a full-time writer for 18 years now. At some point in my life I became a country boy, and the English countryside is a huge inspiration in my books. Mostly, though, I’m fascinated by people.

If you could tell your younger writing self anything, what would it be?

Stephen: I wrote my first novel when I was 12, and I knew from the moment I finished it that I wanted to be a writer when I grew up. But I also figured out that the only way to earn a living by writing at first was to be a newspaper journalist. I think that 12-year-old me was pretty smart and had it all figured out, so I’m not sure I could tell him a lot – except maybe: “Don’t spend so much time writing science fiction (it doesn’t sell as well!).”

Who or what would you say has influenced your writing style the most?

Stephen: I read a huge amount of crime fiction before I started writing it, so I probably absorbed all kinds of influences. I came into the genre through Agatha Christie and Dorothy L. Sayers, the great Golden Age writers, then moved on to authors like P.D James, Ruth Rendell, and Minette Walters (yes, all my major influences were female). But I think my ‘writing style’ is something I’ve developed over many years, just by trying things out and doing what feels right for me.

After reading your bio on your website I’m absolutely amazed at how busy you are. How do you make time for writing?

Stephen: Good question! Crime writers are very much in demand, and there’s an expectation for us to be out there touring, taking part in festivals, doing signings and interviews, and all that stuff, as well being active on social media, sending out newsletters, replying to readers’ emails… the list is endless. Personally, I love doing events, and I think contact with readers is vital – they are the most important people to me as a writer. But there’s a balance to be struck between that and leaving enough time to write the next book. It’s difficult, particularly in the early stages of a writer’s career, when you have to work so hard to be seen and get your name known. Luckily, I’m a full-time writer, so I’m able to organise my life around those various commitments.

Can you tell us a bit more about Dead in the Dark, the newest book in the Ben Cooper and Diane Fry Series?

Stephen: For this book, I was interested in the idea of trying to get a conviction for murder without a body. I’ve talked to lots of crime fiction readers at events, and I’ve learned that many people think the way to get away with murder is to make sure the body is never found. This used to be true in the UK, as a result of a miscarriage of justice way back in the 17th century – a notorious case in which three people were hanged for murder, only for the alleged victim to turn up alive and well two years later! For centuries, courts took the view that there had to be a body (resulting in some inventive ways of disposal). But advances in forensic science now make it possible to achieve a murder conviction without the body being found. The trouble is, you only need one convincing witness to put enough doubt into a jury’s mind… In ‘Dead in the Dark’, Detective Inspector Ben Cooper of Edendale CID has to investigate the case of a man who escaped justice in a murder case, and who is himself now missing. The inquiry takes him into the depths of one of the Peak District’s limestone dales, an area full of caves and abandoned mine workings. Who knows what he might find down there in the dark?

Stephen: When I started writing that first Cooper & Fry novel ‘Black Dog’ (nearly 20 years ago now), the protagonist in most British crime series seemed to be a world-weary, middle-aged, semi-alcoholic loner. It was always a man, and he was always senior in rank (at least a Detective Inspector in the UK). I wanted to do something different, so I decided to make my series characters young, and junior police officers. And of course one of them is a woman! I also wanted to write about a rural area, but deal with serious contemporary subjects and have slightly darker feel, to try and break down that barrier between traditional or ‘cosy’ crime and the more urban thriller. So I chose the Derbyshire Peak District as a setting, and created the fictional town of Edendale. Ben is the local boy, who grew up in a farming family and knows everyone, while Diane is the outsider, a big city girl. This gave me two contrasting pairs of eyes through which to explore the setting, the Peak District, a very important background to the books. The characters developed as I wrote about them, and Ben and Diane became very distinct personalities.

Why do you think your readers are so drawn to the main characters Cooper and Fry?

Stephen: Ben Cooper is definitely the more popular of the two, and has a lot of fans around the world. I think it’s because he’s ‘a nice lad’ as we’d say in Britain. He has a strong sense of humanity and compassion, and he’s always trying to do the right thing. And because he’s still quite young, readers get very involved in Ben’s personal life, and have strong views on whether a current girlfriend is right for him! Diane Fry is a more complex character, and she divides opinion. But this means readers are drawn to finding out more about her, and wondering what she’ll do or say next. The relationship between them has become very complicated and could go in any direction. I love leaving the characters and story a bit open to interpretation by readers. For this reason, I don’t describe Ben and Diane in any great physical detail in the books, because I want each reader to form their own picture in their imaginations. This means we’ve created the characters together, and readers are more invested in their stories.

This series has been successful and long running with Dead in the Dark being Book 17. How do you keep your characters and stories fresh and engaging?

Stephen: It’s important for the characters to be constantly developing and moving forward. This is what keeps me interested in writing about them, and largely what brings readers back to read the next book. If they ever feel as though they’re stagnating, that will be the time to stop writing about them. Derbyshire and the Peak District have been a big inspiration, and it’s such a diverse area that I can choose a different location every time and that gives each book a different atmosphere. Of course, there’s no shortage of ideas for plots. I try to reflect what’s happening around me in the real world when I’m writing a story, and the real world never seems to let me down by being dull!

Where do you see this series going?

Stephen: There’s another Cooper & Fry novel on the way – the 18th in the series, called ‘Fall Down Dead’. But I have lots of ideas for different stories which I haven’t had time to work on, so who knows what might come after that?

What question do you wish someone would ask about you or your book but nobody has?

Q: “I like Ben Cooper so much. How could I get arrested by him?”

A: “Go to Edendale and commit a murder!” 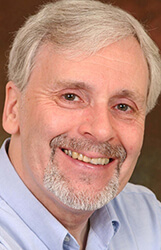 A former newspaper journalist, British author Stephen Booth is the creator of two young Derbyshire police detectives, Ben Cooper and Diane Fry, who have appeared in 17 crime novels, all set in and around England's Peak District.

Sneak Peek from An Eye for a Lie...

Well done – he is a new name for me

Great interview. That book looks really good. I want it.

I really like the cover of his book! Usually that’s what attracts me first to a book. Great interview!

I really like the cover too! I think the cover is sooo important.

I love that you asked how does he keep his character engaging after 17 books. Because when I first saw that this was book 17 I wonder as to if the characters became muddled or lacking. But it seems that he has pin pointed them down and really come to know his creation to keep then genuine but show growth through out the series as well.

17 is a looong series. I can get really bored quickly with a series if I’m not kept engaged. So I was just curious how the heck he keeps readers engaged 🙂

I love the interview, gave more insight into the series and built my interest!

Haha! That interview, especially the way it ended was too cute. Great post!

I love the cover too! Thank you!

Great interview. I always enjoy learning about the author behind the book.

Interesting interview – hadn’t heard of this author before!

Great interview. I’ve not heard of Stephen before. Love his answers and his books sounds good too.

Thanks! I think his book sounds great too!

Many thanks for the interview! It’s much appreciated. And I love this cover too. 🙂

You’re so welcome! Thanks for swinging by Stephen 🙂 Lovely to hear from you.

“When you signed that agreement, you gave me your mind, body and soul. Your mind will be focused on me, always. Your body will be under, on top, or spread wide open for me- always. Your soul will be intertwined with mine, forming one physical body of unity- always.”