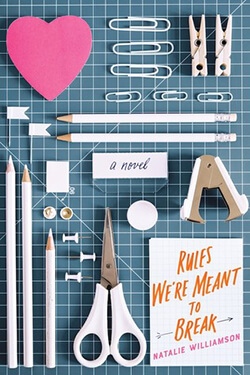 Honest and full of heart, this clever contemporary romance debut deftly combines utterly relatable family drama with all the sweetness and uncertainty that comes with falling in love.

Amber lives by strict rules to survive her mother’s love life: Always keep your eyes on the horizon and never get close to anyone connected to Mom’s boyfriends.

But after they move in with Kevin, the latest of her mom’s “soul mates,” the rules become increasingly difficult to follow. Kevin’s daughter, Cammie, keeps acting like Amber’s friend, even though she’s definitely not. And Jordan—star basketball player, hottest boy in school, and Cammie’s best friend—keeps showing up at the most inconvenient moments.

Amber has reasons for every one of her rules, and following them is the only way to protect her heart when her mom inevitably moves on. But as she spends more time with Kevin, his daughter, and especially Jordan, she starts to wonder if the rules might be worth breaking this time.

Chosen by readers like you for Macmillan’s young adult imprint Swoon Reads, Rules We’re Meant to Break is a charming, heartachingly real story of family and young love by debut author Natalie Williamson.

“The last time I devoured a book like this—I can’t even remember. … It was so openhearted and raw.” —Clarissa, reader on SwoonReads.com

“It is such a true true story about a girl finding herself within her first love. I loved it!” —Forever Bookish, reader on SwoonReads.com

The air is crisp, cold for October, and the sky is already getting dark as Buffy and I set off down our new street. Buffy’s ears are pricked forward and she’s checking everything out, but I stop pay- ing attention to where I’m going as soon as my feet hit the pavement. I know this neighborhood well, weirdly enough. My best friend, Hannah, and I drove through here all the time when we first got our licenses sophomore year. She had a huge crush on Will Hoefling, this senior who lived here, and seeing his car, in his driveway or elsewhere in the neighborhood, always gave her the ultimate thrill.

Those drives helped me learn pretty much all the twists and turns of this place, which I guess is a good thing since I live here now. Even after Hannah got over Will we still came through here every once in a while to check out our favorite houses, which were usually so big or so ridiculous that we couldn’t imagine actual people living in them. Our absolute favorite, for both the bigness and the ridiculousness, was The Castle.

The Castle is just like how it sounds, complete with turrets and a tower and a porte-cochère over the driveway, with an iron gate that drops down to close it. It looks too big to be allowed. Like it was scooped up from some fairy-tale world and dumped here on a lot so tiny it doesn’t even have a front yard. I didn’t know this until a few weeks ago, when Mom was giving me the hard sell about us moving in with Kevin, but the other guy in Kevin’s practice lives there. She said that they “do dinner” a lot and that we would probably be invited. The prospect is a little disturbing. I can’t help wondering if I’ll have to put on a big, poufy dress and a wig like old British royalty in order to be let inside.

I don’t realize I’m heading toward The Castle until I’m turning onto the street. It’s automatic, I guess, a route so worn into my brain that I don’t even have to think about it. I stare at it as Buffy and I come around the bend and walk slowly around the cul-de-sac, wondering how much schmoozing I’m going to have to do in there before Kevin gets dumped.

Suddenly I notice a sound, different from the rest of the night sounds. Someone’s dribbling a basketball. There’s a pattern to it: three dribbles, then the swishing of the net. Like how my dad taught me to shoot free throws when I was little and he was still around. I look over my shoulder, trying to figure out where the dribbling is coming from, but before I can pinpoint it the pattern is interrupted. Instead of the swish I’m expecting there’s a loud bang, and then a guy’s voice is yelling, “Watch out!”

I duck on instinct and there’s a whooshing sound as something large flies over the top of my head. A second later there’s a rubbery thwack as that something—the basketball, I assume—lands somewhere very close behind me and rolls off down the street.

“You okay?” that same voice asks as I straighten back up. “That was a close one.”

“I’m good,” I say, but it comes out strangled because I can see him now, standing at the end of the driveway to the left of The Castle, lit up from behind by the motion light hanging over the garage. And I know who he is. Jordan Baugh. I can’t believe I didn’t notice him before.

“You sure?” Jordan says, taking a step closer.

“Yup,” I say, nodding furiously and backing away. I jerk my thumb over my shoulder and say, “I’m just gonna go get your—ball.”

“Oh, it’s okay,” he says, and to his credit he doesn’t laugh at my weird stumbling over the word ball. “I can get it, just let me—” But I don’t let him finish. I drop Buffy’s leash, say, “Chill,”  and turn and run off down the street. 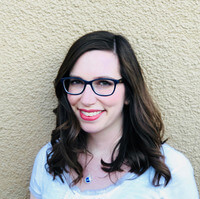 Natalie Williamson is an HR person by day and a YA writer by night and nap time. She referenced Harry Potter in her first ever full time job interview, which tells you almost all the things you need to know about her. Other important things to know include: she loves her husband, daughter, dogs, and cat; she has a serious dessert problem; and she frequently Wikipedias movies and TV shows to find out if they have happy endings. RULES WE’RE MEANT TO BREAK is her debut novel.

“She does it so easily. Makes me crave her like a junkie with an open, aching vein. Like an addict lost forever to the soul-searing pleasure of her sensuality”