Interview with Sara Dobie Bauer – Author of Bite Somebody Else

I’m excited to have author Sara Dobie Bauer to Aurora B’s Book Blog.  Sara’s been kind enough to answer a few questions and share her newest release Bite Somebody Else; Book 2 in the Bite Somebody Series. Thank you Sara for swinging by! 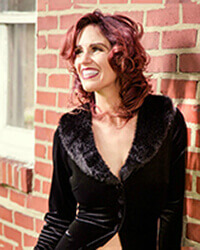 Sara Dobie Bauer is a writer, model, and mental health advocate with a creative writing degree from Ohio University. Her short story, “Don’t Ball the Boss,” was nominated for the Pushcart Prize, inspired by her shameless crush on Benedict Cumberbatch. She lives with her hottie husband and two precious pups in Northeast Ohio, although she’d really like to live in a Tim Burton film. She is a member of RWA and author of the paranormal rom-com Bite Somebody, among other ridiculously entertaining things.

AB: What would you say is a typical day in the life of Sara Dobie Bauer?

Sara:  If no ones messes with my routine (ahem, husband), then I wake up at 7 AM, feed my dogs, make coffee, and troll Tumblr. (I have a Benedict Cumberbatch addiction.) I write every day but not always my own stuff. Sometimes, I do marketing copy or blog posts. I answer a trillion emails. I go to the gym so as not to become a serial killer (anger issues) and walk my dogs. Sometimes, I forget to eat. Sometimes, I’m a model. Sometimes, I’m a singer. I’m often a beer drinker. I try to make yummy dinners for my hot husband, but I’m occasionally quite lazy, and we eat cheese and crackers instead, preferably while watching Archer. Hmm, as I write this, I realize there is no typical day—but what’s life without surprises?

Sara:  To prevent this interview from becoming a Benedict Cumberbatch love fest, I’ll say this: the man has charisma. He seems genuinely funny, nice, and kind of nerdy … but goodness gracious, no one fills out a Spencer Hart suit like Mr. Cumberbatch. I first saw him in Sherlock, and as soon as I heard him talk, my heart was aflutter. My husband also has a super deep voice, so maybe I have a thing for deep voices. Benedict and my husband both also have gorgeous mouths. I’m pretty sure I have a thing for mouths. And cute butts.

Sara:  I’ve suffered from depression and anxiety most of my life, and I know how frustrating it can be to suffer in silence. After Robin Williams died, I spoke out about how I use humor to cover up how sad I feel sometimes. Once I opened up about my own issues, people got in touch to share their stories. There’s a weight lifted when we are honest about how we feel. I want people with mental illness to feel comfortable discussing their struggles and not be embarrassed or shunned. The more we talk about mental illness, the more we shine a light in the darkness—the more we take away its power.

AB:  Who and/or what are your biggest influences?

Sara: Rainbow Rowell. Tim Burton. Helena Bonham Carter (give me all her clothes, please). I pretty much always have a Rocky Horror Picture Show song in my head (“Damn it, Janet …”). Halloween. Cemeteries. Autumn. The smell of a clove cigarette in the wind.

AB:  Where do you do your best writing from?

Sara:  The big window on the second story of my house. It’s where my desk is, wedged between two walls in our crooked, century home in Ohio. When I’m stuck on a scene, I stare at my neighbors. Pretty sure they think I’m a witch.

AB:  What is the most difficult part of your artistic process?

Sara:  Rewrites. I hate rewrites. I love the first draft when everything is fresh and easy and new. Once I get feedback and realize I actually have to, like, change things, I get grumpy. Just ask my editor.

AB:  Can you tell us more about your upcoming release Bite Somebody Else?

Sara:  The first book in the Bite Somebody series was Celia’s story with Imogene as her grumpy, badass sidekick. Bite Somebody Else is Imogene’s story (and the crowd goes wild). I never expected readers to love Imogene so much. I think she’s hilariously abrasive, but fans just clung to her. When we announced she was getting her own book, a friend of mine invented a hashtag: #Imogene4Life. The biggest challenge was figuring out who Imogene would fall in love with—and who would fall in love with Imogene. You’ll have to read the book to find out more about her man Nicholas … but he might be roughly based on a certain tall British actor.

AB:  What do you think readers will love most about Bite Somebody Else?

Sara:  The interplay between Imogene and Nicholas. They really know how to bug each other. Imogene’s persistent sarcasm is a perfect foil to Nicholas and his old-fashioned British manners. They’re comic gold, and I barely had to work for it. I just put the two of them in a bedroom, locked the door, and watched the fireworks.

AB:  In a sub-genre where vampires are so prevalent, what makes the Bite Somebody series stand out?

Sara:  I make fun of the genre as much as I embrace it. The whole modern idea of vampires (don’t tell Stoker) is that they’re all beautiful and charming and shimmering in the sun. My vampires are awkward and chubby and say the wrong (wrong) things. Their lives aren’t filled with beds of black velvet and candelabras. Instead, my vampires live in beach shacks, drink dive bar rum punches, and chase people with garden shears.

AB:  If you were to make the Bite Somebody series into a movie who would you want to direct it?

Sara:  Tough one, but I’d say Edgar Wright. He’s directed a lot of Simon Pegg moves. The World’s End is one of my favorites because it mixes dark, scary stuff with ridiculous comedy. (“WTH, Gary?”) The Bite Somebody series would need a similar touch, what with all the decapitations and farting couches.

AB:  As far as your writing goes, what are your future plans?

Sara:  More writing! But seriously, more writing. Once Bite Somebody Else begins running amok across the world, I have rewrites to do on two other novels. I’m in a bunch of upcoming anthologies, and I have a three-novella series with Pen and Kink Publishing coming out next year. For all the wonderful things, feel free to stalk me: http://SaraDobieBauer.com.

AB:  What question do you wish someone would ask about you or your book? (then answer it :))

AB:  Thanks again for swinging by and wish you the best! xo 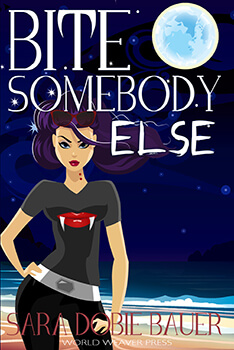 Bite Somebody Series Book 2
Add to Goodreads
Buy on Amazon

Imogene helped her newbie vampire friend Celia hook up with an adorable human, but now Celia has dropped an atomic bomb of surprise: she has a possibly blood-sucking baby on the way. Imogene is not pleased, especially when a mysterious, ancient, and annoyingly gorgeous vampire historian shows up to monitor Celia’s unprecedented pregnancy.

Lord Nicholas Christopher Cuthbert III is everything Imogene hates: posh, mannerly, and totally uninterested in her. Plus, she thinks he’s hiding something. So what if he smells like a fresh garden and looks like a rich boarding school kid just begging to be debauched? Imogene has self-control. Or something.

As Celia’s pregnancy progresses at a freakishly fast pace, Imogene and Nicholas play an ever-escalating game of will they or won’t they, until his sexy maker shows up on Admiral Key, forcing Nicholas to reveal his true intentions toward Celia’s soon-to-arrive infant.

Don’t forget to check out Book 1 in the Bite Somebody Series!! 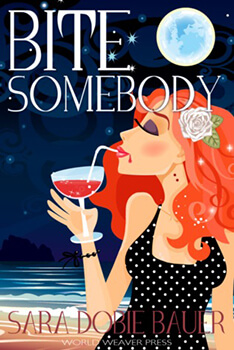 Bite Somebody Series Book 1
Add to Goodreads
Buy on Amazon

“Do you want to be perfect?”

That’s what Danny asked Celia the night he turned her into a vampire. Three months have passed since, and immortality didn’t transform her into the glamorous, sexy vamp she was expecting, but left her awkward, lonely, and working at a Florida gas station. On top of that, she’s a giant screw-up of an immortal, because the only blood she consumes is from illegally obtained hospital blood bags.

What she needs to do—according to her moody vampire friend Imogene—is just … bite somebody. But Celia wants her first bite to be special, and she has yet to meet Mr. Right Bite. Then, Ian moves in next door. His scent creeps through her kitchen wall and makes her nose tingle, but insecure Celia can’t bring herself to meet the guy face-to-face.

When she finally gets a look at Ian’s cyclist physique, curly black hair, and sun-kissed skin, other parts of Celia tingle, as well. Could he be the first bite she’s been waiting for to complete her vampire transformation? His kisses certainly have a way of making her fangs throb.

Just when Celia starts to believe Ian may be the fairy tale ending she always wanted, her jerk of a creator returns to town, which spells nothing but trouble for everyone involved.

“Witty banter and hot sexy-times make BITE SOMEBODY sparkle in all the right ways.”
—Beth Cato, author of The Clockwork Dagger series

“BITE SOMEBODY is the Pretty in Pink of vampire stories; fun, self-consciously retro, and not afraid to be goofy. Sara Dobie Bauer knows how to keep a reader smiling.”
—Christopher Buehlman, author of Those Across the River